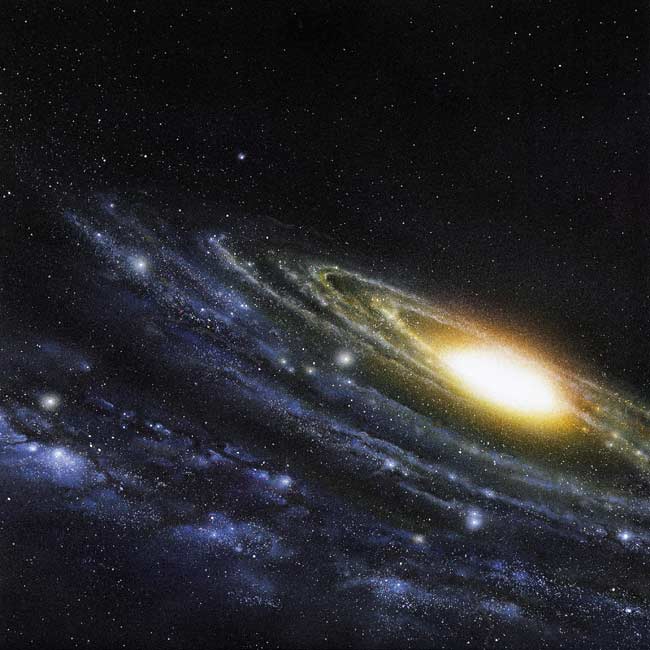 Kardashev civilizations is a scheme for classifying advanced technological civilizations proposed by Nikolai Kardashev1 in 1964. He identified three possible types and distinguished between them in terms of the power they could muster for the purposes of interstellar communications.

A Type I civilization would be able to marshal energy resources for communications on a planet-wide scale, equivalent to the entire present power consumption of the human race, or about 1016 W. A Type II civilization would surpass this by a factor of approximately ten billion, making available 1026 W, by exploiting the total energy output of its central star. Freeman Dyson, for example, has shown in general terms how this might be done with a Dyson sphere. Finally, a Type III civilization would have evolved far enough to tap the energy resources of an entire galaxy. This would give a further increase by at least a factor of 10 billion to about 1036 W. Carl Sagan pointed out that the energy gaps between Kardashev's three types were so enormous that a finer gradation was needed to make the scheme more useful. A Type 1.1 civilization, for example, would be able to expend a maximum of 1017 W on communications, a Type 2.3 could utilize 1029 W, and so on. He estimated that, on this more discriminating scale, the human race would presently qualify as roughly a Type 0.7.

Kardashev explored the consequences of a Type II or III civilization diverting all of its non-essential power resources into an effort to communicate with other races. A Type II civilization, he estimated, could send the information equivalent of a medium-sized library across the Galaxy in a transmission burst lasting just 100 sec (though to travel from one side of the Galaxy to the other would take it tens of thousands of years). The same amount of information could be sent across an intergalactic distance of 10 million light-years with a transmission time of a few weeks. A Type III civilization could broadcast a library of information across the entire observable universe with a transmission time of 3 sec (although the journey to the most distant receiver, in this case, would take about 10 billion years). Kardashev argued that an Ozma-like search would be unlikely to detect a Type I civilization and that SETI programs should concentrate instead on looking for the kind of intense radio signals that might emanate from Type II or III activity. He called attention to two unusual radio sources with the California Institute of Technology designation numbers CTA-21 and CTA-102. Subsequently, Sholomitskii used the Crimea Deep Space Station to examine CTA-102 at a frequency of 920 MHz and reported variability in its output. Kardashev's claim that this was indicative of a possible artificial origin caused a short-lived sensation.

In the fall of 2015, astronomers announced that they had detected unusual light variations in a star with the catalogue name of KIC 8462852, lying some 1,480 light-years away in the constellation Cygnus. The star subsequently became known popularly as "Tabby's Star" after Tabetha "Tabby" Boyajian of Yale University, who was the lead author of the paper in which the discovery was made public.2 Observations from the Kepler Space Telescope revealed frequent but non-periodic variations in the star's apparent brightness of up to 22%. The dimmings are not consistent with conventional explanations such as orbiting exoplanets. A popular hypothesis has been that the variations are the result of a large number of smaller objects, such as cold comet fragments, going around the star. It has also been suggested that these objects might be artificial in nature, possibly a so-called Dyson swarm (a variant on the concept of a Dyson sphere) put in place by a Type II Kardashev civilization to capture a significant portion of the star's light. However, a new explanation, not requiring intelligent aliens, is suggested by the results of a paper which appeared in August 2016.3. This paper refers to similar unusual light variations in another star, EPIC 204278916, which, it says, can be accounted for in terms of a dusty disk tilted at a large angle to our line of sight. Astronomers are now wondering if KIC 8462852's light dips might be explained in the same way, but in the case of Tabby's Star with the dust disk seen virtually edge-on.