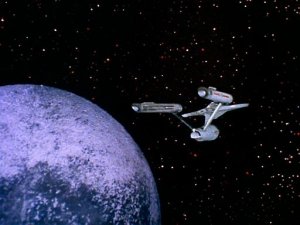 The Enterprise in orbit around Sigma Draconis VI.

Sigma Draconis is an orange dwarf (i.e., main sequence) star located in the northwest part of the constellation Draco. It is a relatively close neighbor of the Sun, at a distance of under 19 light-years.

Although no planets have been found so far orbiting Sigma Draconis, searches will be made over the next decade or so to check for the existence of Earth-like worlds in the star's habitable zone.

In the Star Trek universe, the Sigma Draconis system contains nine planets, three of which are "M class" (i.e., more or less Earth-like). Sigma Draconis VI is the scene of action in the original series episode "Spock's Brain".