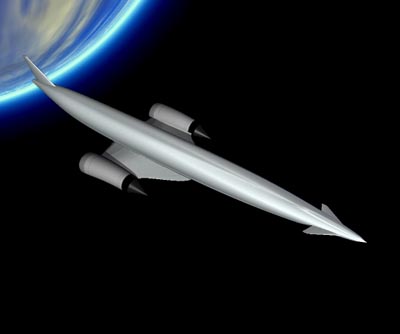 Skylon is a British design for a single-stage-to-orbit space plane intended to improve upon that of an early design called HOTOL. Skylon stems from the work of engineers at Reaction Engines, a company formed in the early 1990s to continue work on HOTOL after the project was officially cancelled. Reaction Engines were not allowed to use the HOTOL RB454 engines, as they were still classified top secret. A new engine was designed called SABRE (Synergic Air Breathing Engine) which would use liquid hydrogen and air until Skylon reached Mach 5.5, then switch to an onboard supply of liquid oxygen for the final ascent to orbit. See air-breathing engine.

Skylon would be constructed from carbon fiber, with aluminum fuel tanks and a ceramic aeroshell to protect the craft from the heat of reentry. A payload bay measuring 12.3 by 4.6 m would allow the payload to use standard air transport containers, increasing ease of use. Skylon could take 12 tons of payload to an equatorial orbit, or 9.5 tons to the International Space Station.

Unlike other comparable projects, Skylon is intended to be run by commercial companies rather than government space agencies, resulting in a design similar to that of a normal aircraft with a vehicle turnaround of only two days between flights, rather than several weeks, as with the Space Shuttle. Operating on a commercial basis could also reduce the price of launches from $150 million for a 2–3 ton satellite to $10 million for all cargo. Eventually, costs could fall to allow a passenger seat to cost only $100,000, opening the way for space tourism. Reaction Engines envisage that by 2025 there could be several companies operating Skylons from specially constructed equatorial spaceports. In 1997 Skylon was considered by ESA (European Space Agency) for the FESTP (Future European Space Transportation Project). In 2011, Skylon's SABRE engine passed a critical design review by ESA propulsion specialists. The next step is hoped to be a ground demonstration of the engine.