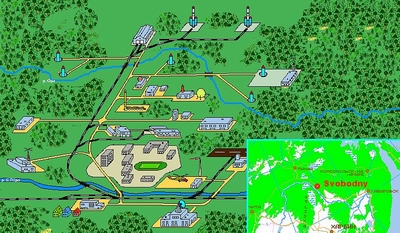 Svobodny Cosmodrome is a former Russian strategic missile base, 120 km north of Blagoveshensk (latitude 51° 42' N, longitude 128° 00' E), that has been converted to a launch site for the Strela and Start-1 space launch vehicles. Further developments may eventually enable the launch of larger vehicles, including the Angara and Proton. Because of its location at a lower latitude than Plesetsk Cosmodrome, the only other spaceport on Russian soil, Svobodny is capable of launching vehicles into orbit with a payload 20–25% higher than this other base.