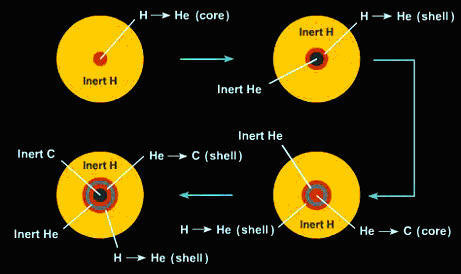 Shell burning is the fusion of hydrogen, helium, and other elements in regions of a star's interior outside the stellar core. As the particular fuel is progressively exhausted, the shell moves outward until it comes to regions too cool to sustain the reactions. For example, helium burning might take place in the core (where the hydrogen has been exhausted) with a shell of hydrogen burning surrounding it. Stars may have more than one region of shell burning during their stellar evolution, each shell with its own nuclear reactions.