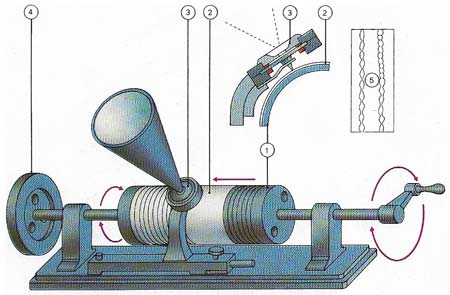 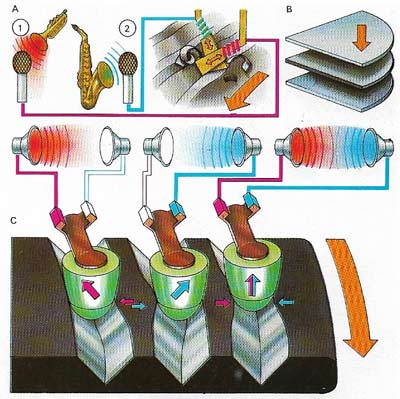 Fig 2. On a stereo disk, the groove walls are angled at 90 degrees to each other. When a recording is made (A), sound from one microphone (1) produces a hill-and-dale contour on one groove wall. The second channel sound (2) contours the other groove wall. After being pressed between metal molds (B), the final plastic disk is ready to be played back. The cartridge stylus of the playback machine vibrates in two planes perpendicular to each other (C). The movement in each of these planes actuates separate electro magnets, which are wired to two different amplifiers and separate loudspeakers. The sound recorded by the two original microphones is thus reproduced independently. 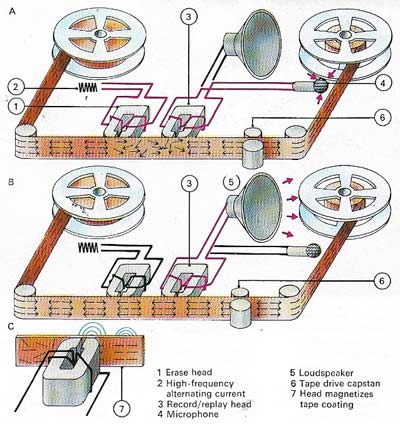 Fig 3. In recording on magnetic tape (A), the tape first passes an erase head which leaves the magnetic particles on the tape in random disarray. Then the record/replay head, energized by a microphone signal, orientates the particles according to the signal's waveform. In playing back (B), the tape again passes the record/replay head. Magnetic variations reproduce in it the currents that formed them (C). After amplification, the currents drive a loudspeaker. 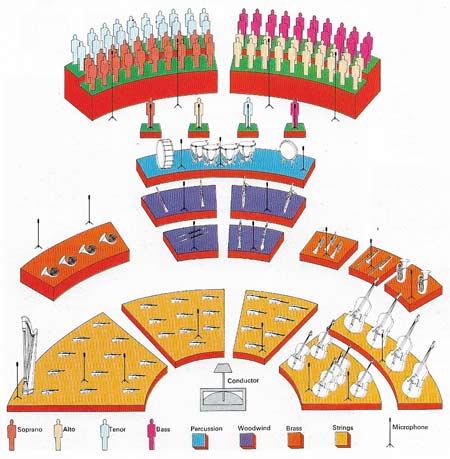 Fig 4. The human hearing process, using a pair of ears, can sense the direction of a sound and so can discriminate between a sound from one direction and background noise from another. This is not so of a microphone, which combines all the sounds it "hears" into one electrical wave. To maintain a high signal-to-noise ratio it is therefore normal to place microphones as near as possible to the desired sound source. To record an orchestra and choir with proper balance between instruments and voices a single microphone would have to be roughly the same distance from each sound source. Except in a perfectly soundproof studio this would result in an unacceptably low to signal-to-noise ratio. The engineer solves this problem by providing separate microphones for each section of the choir and orchestra and for the soloists, the combined outputs then being mixed by electronic means. The balance can then also be adjusted.

Sound recording involves the conversion of sound waves into a form that can be stored and reproduced. In 1877 Thomas Edison invented a phonograph that recorded sound vibrations as indentations made by a stylus on a revolving cylinder wrapped in tinfoil. Emile Berliner's gramophone improved the process by using a zinc disk instead of a cylinder. The volume was amplified by the addition of acoustical horns, which were replaced before World War I by valve amplifiers. In 1901 molded thermoplastic records were introduced and subsequently improved plastics allowed finer grooving which reduced surface noise. In 1927 and 1928 patents were issued in the US and Germany for magnetic recording processes. Later innovations included high-fidelity (hi-fi), stereophonic, and quadrophonic reproduction. Modern recordings on compact disk (CD) employ digital signals (rather than the analog signals used on earlier records).


The development of early sound systems

It was possible, at about the turn of the century, to reproduce the expression and "attack" of an actual piano performance on a pianola paper roll. But the story of sound recording and reproduction as the terms are now understood is the story of the gramophone, the "talking" motion picture and the tape recorder.

Thomas Edison (1847–1931) invented a hand-cranked phonograph (Fig 1) in 1877. The machine converted the air pressure variations of sound waves into a mechanical record consisting of a groove of varying depth in a sheet of tin-foil wrapped round a cylinder. The foil was soon replaced by a hard wax cylinder and in 1894 Charles Pathé (1863–1957) and his brother Emile (1860–1937) opened a phonograph factory.

Meanwhile Emile Berliner (1851–1929), a German in Washington, DC, patented a "gramophone" in 1887. This used a flat disc instead of a cylinder, the sound groove being cut as a spiral. By 1900 the hill-and-dale recording was replaced by a groove that made a stylus vibrate from side to side. And with the advent of a shellac disk pressed from a "negative" of the original recording the gramophone, known in the United States as the victrola, became widely popular.

At first methods of recording and playback were entirely mechanical and the quality of reproduction was poor. The invention of the triode valve in 1906 opened the way to electrical recording and by the 1930s music of much improved quality was reproduced electronically from shellac discs running at 78 revolutions per minute (rpm).

In 1948 the American Columbia Company successfully demonstrated an "unbreakable" vinyl plastic disk and high-fidelity microgroove discs playing for 25–30 minutes a side at 33 1/3 rpm soon became popular. By 1958 the stereo disk had been introduced. It had separate twin soundtracks in a single groove (each corresponding to the sounds received by a listener's left and right ears) and provided a sense of musical presence hitherto unknown in a recording (Fig 2).

Once silent motion pictures had been developed, a system of synchronized sound followed in the mid-1920s. Early "talkies" used an adaptation of the already popular shellac disc. The most successful system had a 40-cm (16-in) disk running at 33 1/3 rpm, with a motor linked mechanically to the film drive. By 1930, engineers had developed a far better system that recorded the sound optically on one edge of the film in the form of a transparent line varying either in density or in width (Fig 3). A fine beam of light shone through the moving line on to a photoelectric cell, its varying electrical output being amplified and fed to loudspeakers.

The idea of converting the varying pressure waves of sound into a magnetic pattern on a continuous steel wire was developed in the 1920s. The British Broadcasting Corporation, which wanted to transmit the same programs to different parts of the world at different times, installed an improved machine in 1931. This used a 6-mm-wide steel tape running at 1.5 m per second to record and replay programs 20 minutes in length.

In 1929 Fritz Pfleumer patented a recording tape that had a flexible insulated base with a magnetic coating. The German AEG company developed this invention and in 1935 in Berlin exhibited the Magnetophone, the first modern tape recorder. But it was not until the end of World War II that the potential of the reel-to-reel tape recorder using 0.5-cm (0.25-in) plastic-based tape with an iron oxide coating (Fig 3), was fully realized. The tape can move at various speeds, with higher speeds providing greater fidelity. The most common speeds for domestic recording are 4.8 cm/sec (1.875 in/sec), 9.5 cm/sec (3.75 in/sec), and 19 cm/sec (7.5 in/sec). For stereo recording two separate soundtracks are recorded side by side using two microphones. Stereo reproduction or playback needs two amplifiers and speakers. The system of dividing the tape into four tracks permits two stereo recordings to be made: tracks 1 and 3 in one direction and 2 and 4 in the reverse.


The cartridge and cassette revolution

The main drawbacks of a reel-to-reel tape recorder are the vulnerability of the tape to damage during threading and the inconvenience of threading and storing it. To eliminate these, the tape cartridge and cassette were invented. The former contains a single loosely wound reel of continuous tape. The tape is fed out from the center at an angle, guided by rollers to the gate where it touches the playback head of the equipment and then back to the outside of the reel.

A cassette recorder has two spools like those of a reel-to-reel recorder, but much smaller, and is suitable for recording, automatic rewind and playback operations. The tape is only 3.8 mm (0.15 in) wide and runs at 4.88 cm/sec (1.875 in/sec). The cassette (plastic case) holds tape for 45, 60, 90, or 120 minutes' playing time and clicks into the cassette player without the need for threading the tape. High-frequency random noise called "tape-hiss" (a consequence of having four tracks recorded on the extremely narrow tape at a slow speed) can lower the quality of the cassette recording. But this blemish on the quality can often virtually be eliminated by using an electronic noise-reduction circuit.