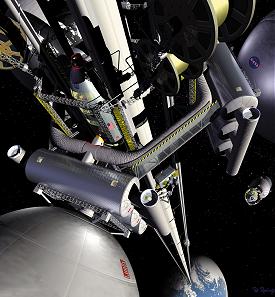 A space elevator is a continuous structure extending from a point on the equator to a point in geostationary orbit. The concept of the space elevator as a cheap and convenient way to access space was first put forward in 1960 by the Russian engineer Yuri Artsutanov (1929–2019).1 It was later developed independently by John Isaacs and colleagues2 of the Scripps Institute of Oceanography and Jerome Pearson3 of Ames Research Center, but went largely unnoticed until 1979 when Arthur C. Clarke used it as the centerpiece for his novel The Fountains of Paradise. It has been described by variety of names, including "heavenly funicular" (Artsutanov's original description), "orbital tower," "beanstalk," anchored satellite," and "sky hook" (the last not to be confused with the old Project Skyhook that sent up high-altitude balloons).

The first inkling of the concept goes back as far as Konstantin Tsiolkovsky who, in his 1895 paper "Day-dreams of Heaven and Earth," imagined escaping from the Earth by climbing a high tower:

On the tower, as one climbed higher and higher up it, gravity would decrease gradually; and if it were constructed on the Earth's equator and, therefore, rapidly rotated together with the earth, the gravitation would disappear not only because of the distancefrom the centre of the planet, but also from the centrifugal force that is increasing proportionately to that distance. The gravitational force drops ... but the centrifugal force operating in the reverse direction increases. On the earth the gravity is finally eliminated at the top of the tower, at an elevation of 5.5 radii of the Earth (36,000 kilometers).

In 1962 the Convair Division of General Dynamics looked into the feasibility of building very high towers for use in astronomy, high altitude research, communications, and rocket launching. A limit was found of 6 km for steel towers and almost 10 km for aluminum ones. Today's graphite composites would extend that to about 40 km. However, this is still three orders of magntitude lower than geostationary orbit, so it's clear that no solid, rigid structure could reach to such an altitude. The solution – and the basis of the space elevator – is to let out a cable, as first realized by Artsutanov. For a fuller description of the history of the space elevator concept and a very user-friendly guide to its operation, the reader is directed to Arthur C. Clarke's 1981 paper on the subject, which can be found at the first of the external links listed below.

A space elevator would consist of a cable some 47,000 km long, yet no more than a few centimeters wide. At the Earth end would be a base station, with all the facilities of a major international airport, above which would rise a launch structure tens of km tall. From this would extend the cable to a space station in geostationary orbit and, further out, a counterweight - perhaps a small asteroid – to which the end of the cable would be tethered. Passengers and cargo would travel up and down the cable at cost estimated to be as low as $1.50 per kg. The idea is being actively explored at the Marshall Space Flight Center and elsewhere (see links below).

Magnetic levitation, or maglev, may provide the best means of propulsion for the space elevator. The greatest technological challenge is the cable itself because the weight of the structure dangling from geostationary orbit would place extraordinary demands on the material used to make it. For a cable of practical dimensions, with a minimum diameter of 10 cm, NASA estimates that it would need to be made of something 30 times stronger than steel and 17 times stronger than Kevlar. One possibility is carbon in the form of so-called nanotubes: tiny, hollow cylinders made from sheets of hexagonally arranged carbon atoms. At present nanotubes are extremely expensive and can be fabricated only in short lengths. However, it seems likely that production costs will fall dramatically in the future and that some will be found to bind nanotubes into a composite material like fiberglass.