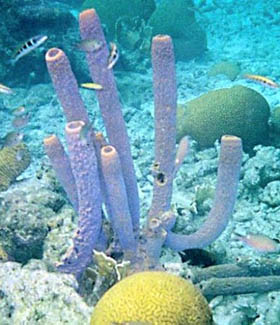 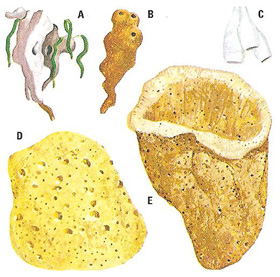 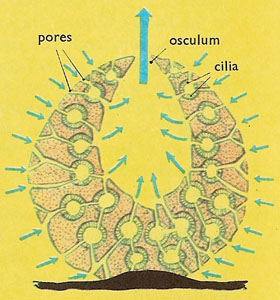 Diagram of the structure of a simple sponge; the arrows show the direction of the circulation of water. 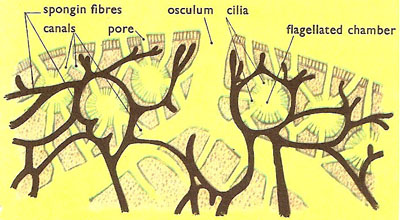 Diagram of a section through part of a sponge with a fibrous skeleton.

A sponge is a member of the phylum Porifera. Sponges are aquatic invertebrates; some inhabit freshwater but the vast majority of the 9,000 or so species known to science live in a marine environment. All are permanently attached to rocks or other surfaces. Sponges were first recognized as living creatures by Aristotle in the 4th century BC, but he cautiously described them as something between a plant and an animal. The naturalists were more inclined to regard them as plants, and it was not until the nineteenth century that zoologists made up their mind that sponges are animals.


Body of a sponge

A sponge is remarkable because of the organs it doesn't possess: it has no limbs, eyes, stomach, or nervous system. The body of a sponge is hollow and consists basically of a millions of cells between which there is little nervous coordination. These cells, however, do have some sort of organization and are specialized to carry out different functions. Some cells are concerned with maintaining a flow of water through the sponge, others with filtering and digesting food, and others with building a skeleton. This skeleton consists not of bones but either of a network of tough fibers (made of fibrous protein) or of thousands of little sharp spicules of chalk (calcium carbonate) or silica. Sponges are classified according to whether they have a fibrous, calcareous, or siliceous skeleton.

The body of a simple sponge is formed rather like a jar, with a small mouth and thick sides. It is covered with a thick skin, in which are thousands of tiny holes, or pores. (Porifera means pore-bearer.) Water is sucked in through these pores and passed trough the walls of the "jar" into the interior. Each pore is the opening of a little canal, which leads to a round space called a flagellated chamber. This is lined with cells carrying tiny hairs or cilia, which lash continually in the water, driving it through the chamber and out by other canals which lead to the interior cavity of the sponge. In this way a continual circulation of water is maintained: in by the pores, through the flagellated chambers, into the internal space, and out by the mouth or osculum.

The accompanying diagrams, to the right and below, illustrate this. The size of the pores is exaggerated; in fact, they are invisible to the unaided eye.

If you try to apply the description given of a simple sponge to the familiar bath sponge it may seem puzzling, because a bath sponge is full of holes of various sizes. These are all outflow mouths or oscula; the bath sponge is best regarded as consisting of many "jars", all crowded together and more or less connected with each other. In the fact the bath sponge is a compound, not a simple sponge. Another point to remember is that the sponge we use consists only of the skeleton of the animal, which in this group of sponges is formed of a fibrous material called spongin. When the sponge was taken from the sea all the part into which the water soaks when used was filled with the jelly-like living matter of the animal, and it was covered with a continuous skin, perforated only by minute pores. All this living matter is allowed to decompose and is washed away when the sponge is prepared for the market.

Sponges reproduce by producing enlarged cells or "eggs", which are fertilized and developed into embryos inside the parent body, and are then passed out through the osculum. They hatch into minute larvae, which swim by means of cilia and eventually settle down to grow into new sponges. A piece cut or broken off a sponge will also grow, like a cutting from a plant. In fact pieces of live sponge have been crushed and sieved in water through a fine silk mesh. The cells separated by this process will come together and form new sponges.