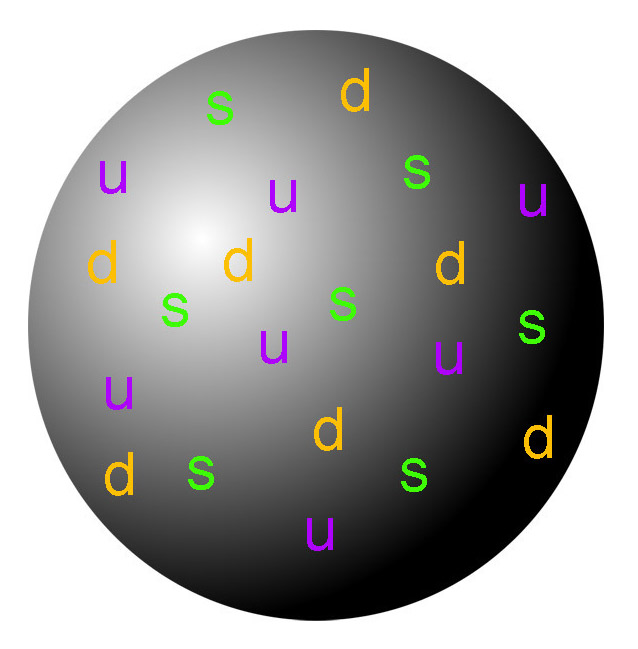 A hypothetical strangelet "super nucleus" made up of roughly equal numbers of up, down, and strange particles..

A strangelet is a hypothetical piece of matter containing roughly equal numbers of up, down, and strange quarks.

Up and down quarks make up the protons and neutrons found in all atomic nuclei, but strange quarks are only created momentarily in high-energy collisions, either natural (for instance, during cosmic-ray collisions in the upper atmosphere) or artificial, in particle colliders.

"Strange," in particle physics, doesn't mean "weird" or "bizarre"; it's just a memorable but meaningless label (like "charm", "colour", or "beauty") for a property that some subatomic particles happen to have. Strange particles certainly exist and are well known in high-energy experiments, but strangelets, which would be bigger and have the mass of small atomic nuclei remain purely theoretical. If they prove to be real and if they were ever manufactured on Earth, however, they could spell trouble. The most striking thing about strange matter is that in the fleeting forms of it with which physicists are familiar it's very unstable. Every strange particle that's ever been created in an experiment on Earth to date has contained no more than one strange quark and has decayed in less than a billionth of a second.

Strangelets are the smallest bits of strange matter that could survive for a relatively long time. But theory suggests there could be much bigger objects made of strange matter, up to and including entire "strange stars", more commonly known as quark stars. These, it's been suggested, might be the final evolutionary state of some stars whose mass is close to, but slightly less than, the critical amount needed to cause them to collapse to become black holes.

Theory also suggests that if strangelets ever came into contact with ordinary matter they'd begin converting it into strange matter in a way analogous to how a seed crystal can trigger a mass outbreak of crystallization in a saturated solution. The original strangelet would bump into a nucleus causing it to change spontaneously into a strange nucleus; the enlarged and more stable strangelet would then assimilate another nucleus, and so the process would go on, spreading and accelerating until, in an inconveniently short time, the whole Earth would be transformed into a big, hot ball of strange matter. Needless to say, we wouldn't survive the metamorphosis.

The danger from strangelets was first raised in connection with a high-energy device called the Relativistic Heavy Ion Collider (RHIC) at Brookhaven National Laboratory on Long Island, New York. The RHIC smashes together gold nuclei moving close to the speed of light, and there were concerns before it went into action in 2000 that it might prove to be a strangelet factory with unpleasant consequences for the planet. A couple of academic papers appeared at the time which took the issue seriously, but decided, after careful analysis, that there really wasn't anything to worry about. In fact, the RHIC has been operating since 2000 without any noticeable nasty side-effects. What's more, it turns out that accelerators like the RHIC which run at lower energies than the Large Hadron Collider are better candidates for making strangelets. So, on this score at least, the European monster machine seems to represent no threat at all.