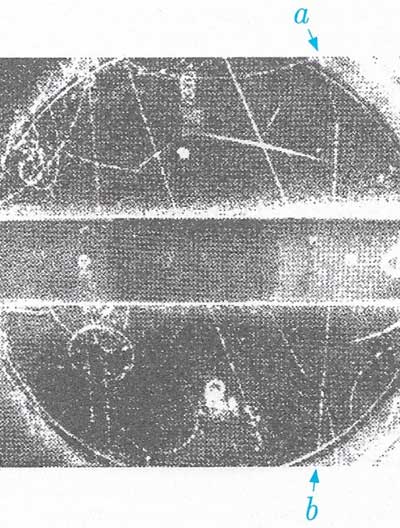 Fig 1. One of the first strange particle events observed in a cloud chamber. A K + meson (track a) enters the top of the chamber before decaying by the reaction K + → μ+ + νμ to give a muon (track b) and an unseen neutrino. The dark band across the chamber is a 3 cm thick lead plate, and track b is identified by its ability to penetrate this plate with little loss of energy. 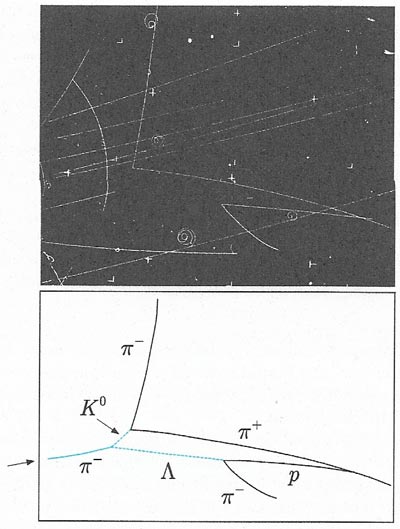 Fig 2. A bubble chamber picture of the associated production reaction π – + p → K 0 + Λ. The incoming pion is indicated by the arrow, and the unseen neutrals (shown as dotted lines) are detected by their decays K 0 → pi + + π –. This picture was taken in the 10 in (25 cm) bubble chamber at the Lawrence Berkeley National Laboratory. 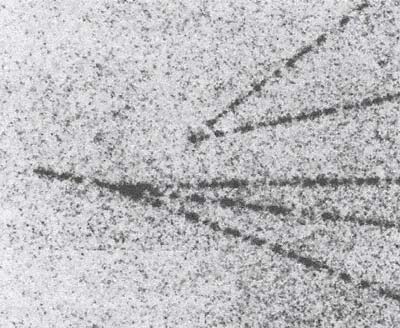 Strangeness is currently recognized to be the third of the quark flavors.

A strange particle is an elementary particle that has non-zero strangeness. Strange particles have anomalously long lifetimes (10–10 to 10–7 s) compared to those of most other hadrons (10–23 s).

Soon after the discovery of the pion, members of the Manchester cosmic ray group discovered other hadrons that were produced in strong interactions, but decayed by weak interactions. This was unexpected, as there was apparently no reason why they should not decay by the strong interaction with lifetimes of order 10–23 s. For this reason they were christened "strange particles". Fig 1 shows one of the first observed events, in which a positively-charged particle of mass around 500 MeV/c 2 decays to a muon and an unseen neutrino. The decaying particle is actually a K + meson (or kaon), with mass 494 MeV/c2 and a lifetime of 1.2 × 10–8 s. Charged kaons have many decay modes, but the principle ones and their branching ratios, B, are

as observed in Fig 1, and

Another example of a strange particle is the Λ (lambda) baryon, which has a mass of 1116 MeV/c 2 and decays mainly into pions and nucleons

with a lifetime of 2.6 × 10–10 s. It is clear from the long lifetimes of the K + and Λ that they both decay via the weak interaction. This strongly suggests that these particles are not made of u and d quarks alone, because if this were the case then, for example, the neutral Λ would be a (udd) state just like the neutron. At the quark level, the decay (a) would then be

which conserves the quark numbers Nu and Nd. We would therefore expect reaction (a) to be a strong decay, with a lifetime of order 10–23 s, in contradiction to experiment. The solution is to assign the quark structure uds to the Λ, so that the decay is

Strange particles are now defined as any particle with a non-zero value of the strangeness quantum number. Most of them, like most hadrons with S = 0, decay by the strong interactions. However, conservation of quark numbers in strong and electromagnetic interactions means that if a particle is the lightest state with a given non-zero set of B, Q, and S values, it can only decay by weak interactions, and so will be relatively long-lived. From its quark structure, Λ has B =1, Q = 0, and S = –1. It is the lightest strange baryon. The lightest strange mesons are the kaons. In addition to the K +, which we have already met, there are negative and neutral kaons, which also decay via the weak interaction. Their quark structures are

The production of strange particles in strong interactions is an example of associated production. In such processes, more than one strange particle is produced, giving strangeness conservation overall. A beautiful example of such an event is given in Fig 2, which shows the reaction

together with the subsequent decays of the kaon and lambda. This picture was taken in a bubble chamber, which is a detection device similar in principle to a cloud chamber, but where the working medium is a liquid rather than a gas. Bubble chambers were invented by Glaser in 1952 and largely superceded by cloud chambers in the late 1950s. The liquid is initially held in a vessel at a pressure above that of the equilibrium vapor pressure at that temperature. When the pressure is suddenly reduced by an expansion, the liquid is left in a "superheated" state, where its temperature is above the boiling point at the reduced pressure. The passage of a charged particle through the liquid produces ion pairs and bubbles form preferentially along the ionization trails. The liquid in the chamber (hydrogen in the case of Fig 2) is both target and detector, and by placing the whole chamber in a magnetic field the particles' momenta can be obtained. The curvatures of the tracks are clearly visible in Fig 2.

In the thirty years following the discovery of the pions and kaons, a great many hadrons were discovered. Until 1974 all could be accounted for as bound states of just the three quarks, u, d, and s, originally proposed by Gell-Mann and Zweig. However, in that year a relatively heavy particle was discovered in two independent experiments, one at the Brookhaven National Laboratory (BNL) and the other at the Stanford Linear Accelerator Laboratory (SLAC). The BNL group, led by Ting, named this new particle J, while the SLAC group, led by Richter, chose ψ. It is now known as J/ψ, and its properties show that it is one of the lightest of a family of particles that are bound states of a charmed quark and its antiparticle, that is

Such cc̅ states are collectively known as charmonium by analogy with positronium, the bound state of an electron and positron. Since C = 0, these states are often said to contain "hidden charm".

Particles with "naked charm" C ≠ 0 were also discovered at SLAC shortly after the discovery of the J/ψ. Because charm is a quark number, like strangeness, it should be conserved in strong and electromagnetic interactions, and the lightest charmed particles should decay by weak interactions. This is indeed the case. For example, the lightest charmed mesons are the D mesons with quark structures

and Ds, mesons with quark structures

while the lightest charmed baryon is

These particles all have lifetimes of order 10–13 s, which is in the expected range for weak decays. Charmed particles can be produced in strong and electromagnetic interactions by associated production reactions, just like strange particles, and a bubble chamber picture of such an event is shown in Fig 3. However, because the charmed particles have much shorter lifetimes than the strange particles (a) and (b), they travel much shorter distances before decaying, and very good spatial resolution is needed to observe their tracks. This was achieved in the present case by only allowing the bubbles to develop to a size of about 0.05 mm before photographing them, compared to sizes of about 0.5 mm used in a typical bubble chamber.

Historically, the discovery of strange particles caused great excitement because they clearly represented a new form of matter that was completely unexpected at the time. The discovery of charmed particles caused equally great excitement because their existence was expected, having been predicted from the then newly formulated theory of electroweak interactions. Their discovery was a decisive event in confirming the essential correctness of this theory, which is a unified theory of both weak and electromagnetic interactions. In .its present form it requires that the number of leptons and quarks should be the same, implying that there should be six quarks to match the six known leptons. Evidence for the fifth quark – the bottom quark b with its associated quantum number B̅ – came from the discovery in 1977 of one of the lightest bottomonium states

which is a hidden bottom state called the upsilon. Subsequently mesons with "naked bottom" B ≠ 0 were discovered, the lightest examples of which are the B-mesons

with lifetimes of order 10–12 s, consistent with their decay via the weak interaction. Examples of baryons with B 0, including >

which decay via the weak interaction, with lifetimes of order 10–12 s, have also been discovered. Research in the field of particle spec-troscopy is ongoing. For example, recent experiments have found evidence for the first examples of a 'charmed-strange' and a "bottom-strange" baryon, that is ones containing a strange quark in combination with a charmed or bottom quark, respectively.