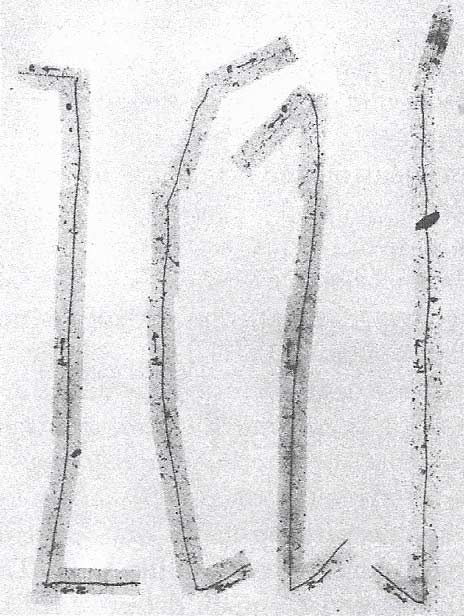 Fig 2. In this image from a streamer chamber, one of the pions from a collision makes the looping track to the right, before it decays into a muon, which then curls anticlockwise four times, and eventually changes into an electron which moves off towards the upper right. Image credit: Tom Kemp. 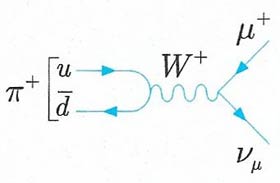 Pions were predicted theoretically by Hideki Yukawa in 1935, and were discovered in cosmic ray experiments on the Pic du Midi by researchers from Bristol University, England, headed by Cecil Powell, in 1947. They are produced copiously in many high-energy particle collisions, specifically in hadronic reactions that conserve both charge and baryon number, for example in the proton-proton collisions

The charged pions decay predominantly by the reactions

with lifetimes of 2.6 × 10–8 s, typical of weak interactions. They were first discovered in cosmic rays by a Bristol group in 1947 using photographic emulsions containing a silver halide. The ionization energy deposited by a particle passing through the emulsion causes the formation of a latent image, and the silver grains resulting from subsequent development form a visual record of the path of the particle. As in a cloud chamber, the range of a stopping particle can be used to estimate its energy. Some historic examples of stopping π + decays observed in this way are shown in Fig 1. Because these are two-body decays, the muons in the final state all have the same energy. Consequently, they all travel approximately the same distance before coming to rest and decaying to give a positron. Neutral pions were discovered somewhat later and decay by the electromagnetic interaction

with a lifetime of 0.8 × 10–16 s. Because they are neutral they do not leave tracks and must be detected via their decay photons.

Pions and nucleons are the lightest known mesons and baryons, respectively, and are bound states of the lightest quarks (u, d) and their antiquarks (u̅, d̅). The only 3q and qq̅ combinations that give the observed electric charges are then

for the nucleons and

for the pions. In π + decay, whose quark interpretation is

and is shown in Fig 3, a u quark annihilates with a d̅ antiquark, demonstrating again that individual quark numbers like Nu and Nd are not conserved in weak interactions.

Pions play an important role in nuclear forces. In 1935 Yukawa proposed that these were due to the exchange of spin-0 mesons and from the range of the forces (which was not precisely known at that time) predicted that these mesons should have a mass of approximately 200 MeV/c2. The discovery of pions was a great triumph for the Yukawa theory. In it, the nuclear forces are given by the following model,

where the nucleons and pions are treated as point particles. Neutral pion exchange gives rise to normal direct forces, while π ± exchange gives rise to "exchange forces" whereby the neutron and proton are interchanged. The resulting potential is of the general Yukawa type, and reproduces the longest range part of the nuclear force r ≥ 2 fm very accurately, including spin effects when these are taken into account. At short ranges r ≤ 1 fm, comparable with the sizes of the nucleons and pions themselves, this agreement breaks down completely. At these distances, the internal quark structure of the hadrons can no longer be neglected and the situation is much more complicated.