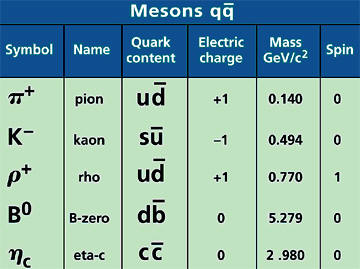 Some types of meson.

In this image from a streamer chamber, one of the pions from a collision makes the looping track to the right, before it decays into a muon, which then curls anticlockwise four times, and eventually changes into an electron which moves off towards the upper right. Image credit: Tom Kemp..

A meson is a type of hadron composed of one quark and one antiquark.

The commonest types of mesons are pions (pi mesons) and kaons (K mesons). These are also the only types of meson which are long-lived enough to be seen directly by their tracks in a detector.

The pion is the lightest type of meson. Pions are composed of up quarks or down quarks, and their antiquark counterparts. Pions of charge +1, -1, and 0 are denoted π+, π-, and π0, respectively. The π0 (mass 135 MeV) is composed of either an up/antiup quark pair or a down/antidown quark pair; the π+ is an up/antidown pair, and the π- is a down/antiup pair (both have a mass of 140 MeV). All have zero spin.

Pions were predicted theoretically by Hideki Yukawa in 1935, and discovered in cosmic ray experiments on the Pic du Midi by researchers from Bristol University, England, headed by Cecil Powell, in 1947. They are produced copiously in high-energy particle collisions.

A kaon is a meson that contains one ordinary quark (either an up quark or a down quark) and one strange quark. K-mesons were first discovered in 1947. The shortened name "kaon" came into use in about 1958. Kaons come in two varieties: positively charged and neutral. They are spin 0, weigh about half as much as nucleons, and decay by means of the weak interactions. CP violation was first observed in kaons.

More massive mesons with the same quark content but higher angular momentum (such the rho meson), as well as others containing one or more of the more massive quark types (such as the eta meson), are all very short lived. They have been found by studies of their decay products, but they decay too quickly to leave a track that can be detected.

Mesons can be positively or negatively charged, or electrically neutral. All are unstable with half-lives of ~10-8 second to ~10-23 second, and decay into stable particles. They are a major component of secondary cosmic rays.

Originally, a meson was considered to be any particle whose mass was between that of an electron and a proton. The name "meson" was coined in 1939 by the Indian physicist H. J. Bhaba. Ironically, so-called mu-mesons, or muons, which were discovered before pions, kaons, or eta-mesons, are not mesons according to the modern definition but are actually leptons.

A B-meson is a so-called because it's composed of one bottom (b) antiquark and one up, down, strange, or charm quark. Its antiparticle, the B-bar meson, consists of a bottom quark and an up, down, strange, or charm antiquark. The B meson is a heavy particle; its mass of 5.28 GeV/c2 (due mostly the high mass of the bottom quark that it contains) is five times greater than that of the proton.

B mesons exhibit CP violation, which makes them ideal particles for studying the tiny differences between matter and antimatter and understanding why there is such a preponderance of matter over antimatter in the present-day universe.

Hideki Yukawa was a Japanese physicist who postulated the meson as the agent binding the atomic nucleus together, i.e., the quantum of the strong force. In fact, the mu-meson, or muon, discovered shortly afterwards (in 1936) by Carl Anderson, does not fulfill this role and Yukawa had to wait until C. F. Powell (1903–69), at Bristol University, discovered the pi-meson, or pion, in 1947 for vindication of his theory. Yukawa received the 1949 Nobel Prize in Physics.

Cecil Powell was a British physicist and pacifist awarded the 1950 Nobel Prize in Physics for his development of a direct means of photographing the tracks of subatomic particles and subsequent discovery of the pion meson.