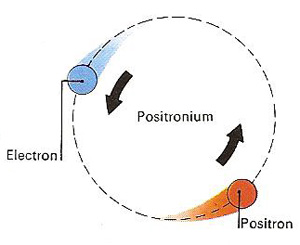 A single "atom" of positronium.

Positronium is a neutral, atom-like system formed between an electron and a positron (the electron's antiparticle), held together by electromagnetic attraction. The name "positronium" was introduced by A. E. Ruark in 1945 and the system was first observed in 1951.