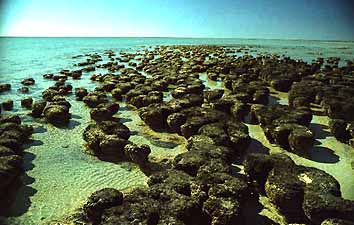 A stromatolite is a rounded, multilayered, sedimentary structure, up to about 1 meter across, formed by microbial mats in which a rock-like layer of either sand or precipitated minerals is also present. Fossil stromatolites constitute our earliest and most pervasive direct record of life on Earth and have been found in rocks dating back at least 2.8 billion years. Although many stromatolites are fossils, there are a number of locations on the modern-day Earth where stromatolites are still forming, as shown in the illustration.