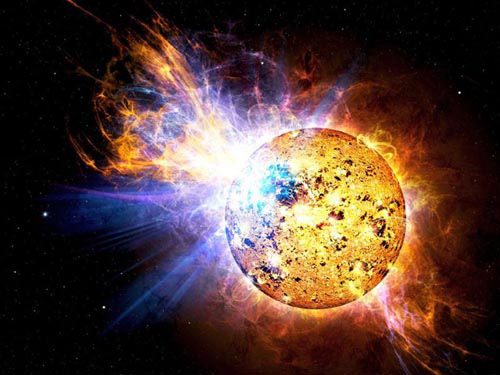 An otherwise normal, Sunlike star emits a superflare many thousands of times as powerful as a typical solar flare in this artist's illustration. Image: Casey Reed / NASA.

A superflare is an event on the surface of a star, similar in nature to a strong solar flare, but between 10,000 and 10 million times greater in its energy output. A small percentage of middle-aged stars which, in other ways, are very similar to the Sun have been observed to give rise to superflares.

Solar flares occur when magnetic-field loops threading through sunspots become twisted and break, releasing a sudden burst of charged particles and radiation into space, some of which reaches the Earth if the affected area of the Sun happens to be facing us at the time. The largest flare on record took place on 1 September 1859, and was seen as a mysterious brightening by British astronomer Richard Carrington, who was drawing a group of sunspots at the time. When the burst of particles from the 'Carrington event' arrived at the Earth, the sudden injection of current into the atmosphere creating sparks in telegraph offices and even set off fires in telegraph paper. Spectacular aurorae were seen around the globe. But even the smallest superflare dwarfs the 1859 outburst.

Superflaring stars tend to have a couple of things in common. First, they're subject to giant starspots, much bigger than ordinary sunspots. Second, they tend to rotate quickly. Research has shown that stars with shorter rotation periods have more (though not necessarily stronger) superflares, presumably because magnetic activity arises from the interaction between a star's rotation and the boiling motion of its ionized gas.