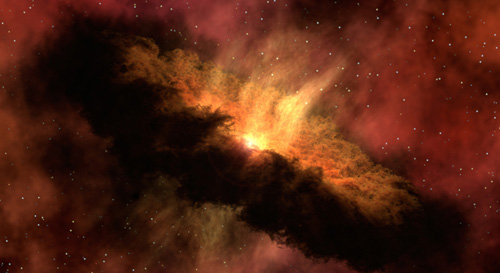 Artist's impression of a dusty planet-forming disk such as that around TYC 8241 2652 1 – until it mysteriously disappeared.

TYC 8241 2652 1 is a young Sun-like star surrounded by a dusty disk that was first detected by NASA's IRAS (Infrared Astronomy Satellite) in 1983. The star lies 460 light-years away in the constellation Centaurus and is thought to be no more than about 10 million yr old – a stellar infant compared with our own Sun, which is nearly 5 billion yr old.

Dusty disks are common around young stars. The disk around TYC 8241 2652 1 glowed bright at an infrared wavelength of 10 microns, indicating a temperature for the disk of about 180°C and a fairly small distance from the star, roughly the same as that of the inner, rocky worlds of the Solar System – Mercury, Venus, Earth, and Mars. All the signs seem to indicate that this young star's disk was due to collisions between planets-in-the-making, a process that is a normal part of planet formation. And then a very strange thing happened: almost overnight all the dust disappeared.

Images taken of the star and its environs in Jan 1010 by NASA's WISE (Wide-field Infrared Survey Explorer) revealed no trace of the disk. Then in May 2012, an infrared image of TYC 8241 2652 1 taken by the Gemini South telescope confirmed that finding. For some reason, which scientists still don't understand, all the dust has vanished.

A couple of theories have been kicked around but researchers aren't particularly happy with them. One possibility is that the dust got dragged into the star by gas that was released in the same impact in which the dust was splashed out. Another idea is that second infusion of dust particles from another major impact between proto-planetary objects caused the dust grains to chip apart into smaller and smaller pieces. The fact is, astronomers haven't seen anything like this before and are still scratching their heads.