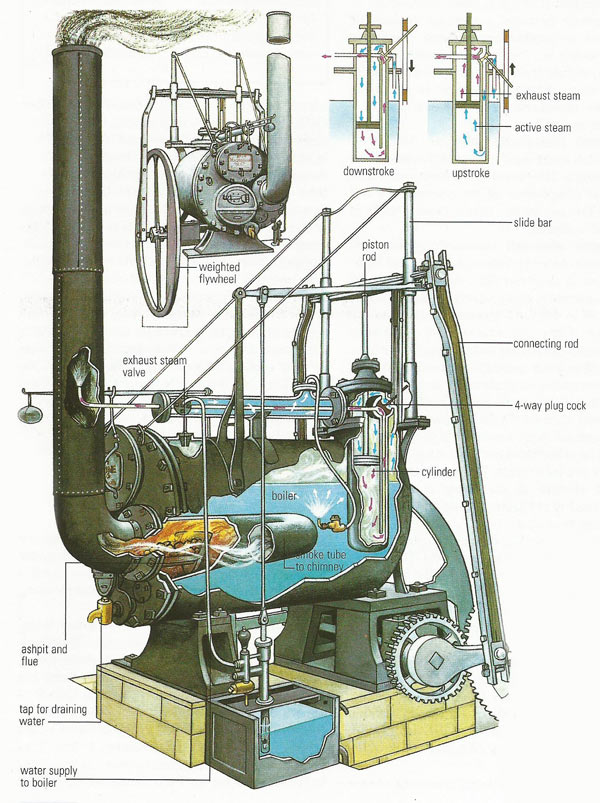 Trevithick's high-pressure portable engine and boiler (c.1805) shown here was built to Richard Trevithick's design by Hazeldine and Co. of Bridnorth, England, and is now in the Science Museum, London. The engine could develop four hp at 50lbs pressure in the boiler. Such engines were to supersede the low pressure beam engines.

Richard Trevithick was a British mechanical engineer and inventor best remembered for his work on improving the steam engine and for building the first railroad locomotive.

Trevithick successfully harnessed high-pressure steam and constructed the world's first steam railway locomotive (1803). In 1805 he adapted his high-pressure engine to driving an iron-rolling mill and to propelling a barge with the aid of paddle wheels. He also experimented with a steam carriage as a road locomotive. In 1812, he invented the Cornish boiler in which the hot flue gasses could also be used to heat the water, so improving efficiency. Trevithick's combined improvements made the new design of Cornish engine do double or treble the duty of the James Watt type, and so they supplanted them as the Watt type had supplanted the Newcomen styles. Lacking business acumen, he died in poverty.