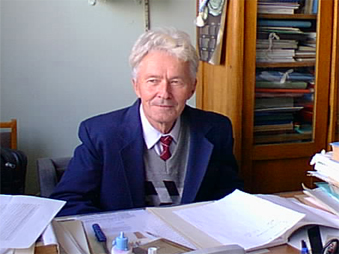 Vsevolod Troitskii was vice-director of the Radiophysical Institute at Gorky and, together with Shklovskii and Kardashev, one of the pioneers of SETI in the Soviet Union. In contrast to Kardashev's belief in supercivilizations and Shklovskii's revised belief that the human race is alone, Troitskii argued that the majority of technological civilizations are probably at about our level of advancement or slightly higher. In their attempts to establish interstellar contact, such civilizations, he suggested, would send out highly directed narrow-band signals toward the star systems they deemed most likely to be inhabited.

After completing technical school in 1932, Troitskii worked in the Central Radio Laboratory at Nishnij-Novgorod (later renamed Gorky) until 1936. He graduated from the University of Gorky in 1941 and joined the staff of the Gorky Radiophysical Institute in 1948. His thinking about the possibility of extraterrestrial signals began just prior to the 1964 All-Union Meeting on Extraterrestrial Civilizations at Byurakan (see Byurakan SETI conferences). Subsequently, he became the first chairman of the section of the Soviet Academy of Sciences responsible for SETI. In 1968, he began a targeted search of the 12 nearest star systems, and in 1970 an all-sky survey, the most ambitious SETI project at that time, which eventually logged over 700 hr of observations.