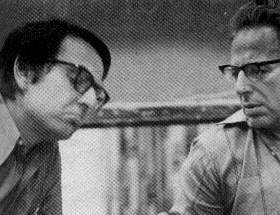 Shklovskii (r) and Sagan debate at a CETI conference.

Iosif Shklovskii was a Ukrainian astrophysicist, best known professionally for explaining that the continuum radiation of the Crab Nebula is due to synchrotron radiation and best known generally for the book Intelligent Life in the Universe,2 which was expanded and introduced to the West by Carl Sagan. Shlovskii was largely responsible for making SETI a subject of serious scientific concern in the old Soviet Union.1

Having graduated from Moscow State University (1938), he began work at the Sternberg State Astronomical Institute, but following the Nazi invasion he moved to Central Asia with a number of other students, including Andrei Sakharov. After the War, he returned to Sternberg, obtained a PhD in mathematical physics (1950) and became head of the Department of Radio Astronomy. He investigated the solar corona, showing that its temperature is around one million K and that it is confined by magnetic fields; carried out early studies of planetary atmospheres; suggested that cosmic rays from occasional nearby supernova explosions may have been the cause of some mass extinctions on Earth and therefore may have played an important role in the evolution of terrestrial life; predicted the existence of astronomical masers; proposed, in 1965, a new distance scale to planetary nebulae and put forward the modern idea that planetary nebulae represent a transitional stage from red giants to white dwarfs; made theoretical and radio studies of supernovae; and successfully explained some X-ray stars as binary systems containing neutron stars.

In a country of tight censorship, Shklovskii was never afraid to give voice to his fertile imagination. Among his many less orthodox suggestions were that the moons of Mars might be artificial and that advanced civilizations might obtain new resources by intentionally triggering supernovas using gamma-ray lasers. One of his students was Nikolai Kardashev.3