Artist's impression of Tau Bootis b. 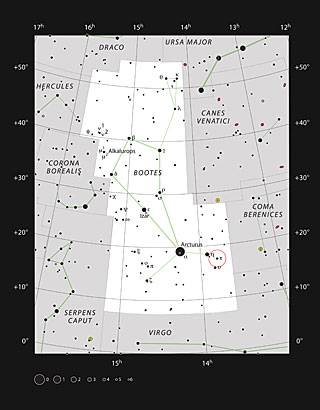 The sky location of Tau Bootis.

Tau Bootis is a nearby binary star system in the constellation Boötes. It consists of an F star primary (a bit bigger and brighter than the Sun), Tau Bootis A, and a red dwarf companion, Tau Bootis B. The red dwarf moves around the primary in an extraordinarily elongated path (eccentricity = 0.91), taking about 2,000 years to complete each circuit at an average distance of 245 astronomical units (37 billion km, or 23 billion miles).

In 1996, a massive planet was found in orbit around the primary at less than one eighth the distance of Mercury from the Sun, making it one of the most extreme examples yet found of an epistellar jovian or "hot Jupiter". It remains one of the nearest exoplanets known.


Atmosphere of Tau Bootis b