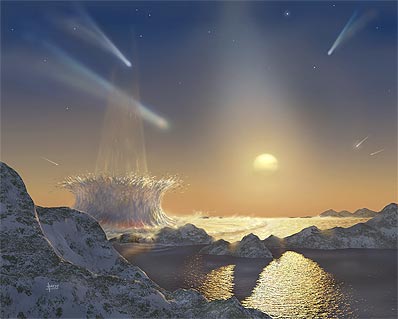 A hypothetical planet of Tau Ceti. Painting by David Harding.

Tau Ceti is the most Sun-like of the 30 nearest stars to the Sun. It lies in the constellation Cetus and is easily visible without a telescope. Five planets have been found in orbit around it, including one that lies within the star's habitable zone, where liquid water can exist on the surface.

Tau Ceti has been the target of many SETI (Search for Extraterrestrial Intelligence) programs including the first, Project Ozma, which also looked for signals from Epsilon Eridani. It is also the first star to be found to have a disk of dust and comets around it similar in size and shape to the disk of comets and asteroids that orbits the Sun. However, the similarity ends there because it appears that Tau Ceti has more than ten times the number of comets and asteroids that there are in our Solar System.

It had been debated among scientists whether Tau Ceti would turn out to be accompanied by any planets – its low metallicity making it questionable whether the nebula from which it condensed had sufficient heavy element content to allow planet-sized objects to form. If planets were present, it was argued, they would likely be subjected to a much more intense bombardment than anything the Earth has experienced, making the long-term survival of any life problematic.

In December 2012, it was announced that five planets had been detected in orbit around Tau Ceti. The quintet includes planets between two and six times the mass of Earth, with periods ranging from 14 to 640 days. One of the worlds, cataloged as HD 10700e, lies about half as far from Tau Ceti as Earth is from the Sun – and because Tau Ceti is slightly smaller and dimmer than our Sun, that puts the planet in the so-called habitable zone.