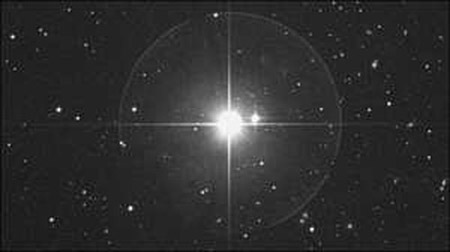 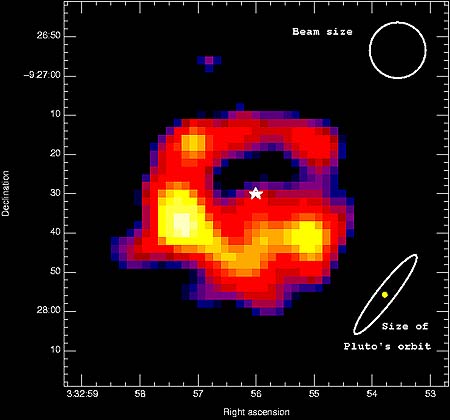 A 1998 image of the dust disk surrounding Epsilon Eridani.

Epsilon Eridani is the nearest, reasonably Sunlike star, having about three-quarters the mass of the Sun and one-third the luminosity. It lies in the constellation Eridanus at a distance of just over 10 light-years. An orange-red dwarf, Epsilon Eridani spins relatively fast, with a rotational period of 11 days (compared with the Sun's 27 days). This quick rotation generates a comparatively strong magnetic field, which results in a lot of chromospheric activity, including large starspots, and a variable spectrum characteristic of a BY Draconis star.

Not surprisingly, Epsilon Eridani has been the target of intense scrutiny by SETI projects, including the first, Project Ozma. It is now clear why these searches could not have been successful: Epsilon Eridani is a young star, with an age between 500 million and 1 billion years. Intelligence could not have developed in so short a time, even given the availability of a suitable planet. In September 1998, however, came news that the Epsilon Eri system may be like the solar system in other ways. Observations at submillimeter (very short radio) wavelengths showed that it is surrounded by a ring of dust at about the same distance as that of the Kuiper Belt from the Sun.1 A bright region in the ring might be caused by particles trapped around a young planet, while a partially evacuated region nearer the star might indicate the presence of other unseen worlds. The density of dust in the Eridanian system is about 1,000 times that found in the solar system today, but roughly what it would have been like in the solar system about 4 billion years ago – about 600 million years after the Earth and other planets formed, toward the end of the period of heavy bombardment. This discovery adds to the growing body of evidence that planetary systems around other stars are the rule rather than the exception. Moreover, Epsilon Eri provides a window into what conditions may have been like in the neighborhood of the Sun at a time when life was first beginning to emerge on the young Earth.

In 2000, astronomers announced the discovery (or a possible confirmation of earlier detections) of a Jupiter-like planet around Epsilon Eri.2 In October 2002 came news of a second planet in the Epsilon Eri system based on morphological studies of the dust disk.3 At the time, one of the lowest mass extrasolar worlds discovered, with a mass roughly one tenth that of Jupiter, it also had by far the longest, largest orbit of any then found with an orbital period of 280 years. The presence of a third planet, Epsilon Eridani C, was suggested by researchers at the University of Rochester using a new technique that does not use direct light from the star, but rather light radiating from the dust surrounding it. Not all stars have large concentrations of dust, but those that do, like Epsilon Eridani, can display telltale patterns in their dust fields that may lead to planetary detection.