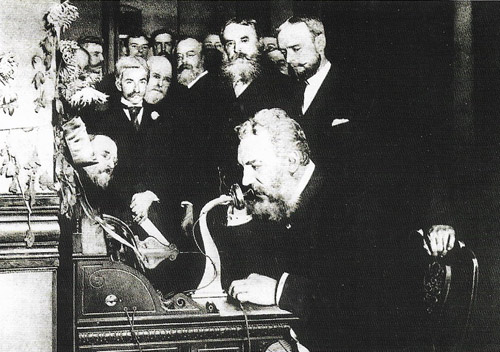 Humans are social animals, but the natural desire to be able to speak to individuals who are geographically distant was frustrated until 1876, when what seemed an impossible dream became a reality. Yet the birth of what was understood as the "speaking telegraph" was by no means without controversy because many individuals claimed a role in its invention.

The telephone (the name derived from the Greek for "distant voice") developed from the electrical telegraph, an early 19th-century invention by Samuel Morse (1791–1872) and others. This device used electrical signals conveyed along wires to transmit individual letters that together formed a message. Useful though it was, the telegraph lacked the immediacy and depth of nuance of human speech, but in the second half of the century inventors developed acoustic telegraphy, capable of transmitting multiple messages along a single wire at the same time by using different channels or audio frequencies. From this development it was a simple step to create a working telephone with a mouthpiece that converted the sound of the human voice into electrical signals, and a receiver that converted the signals back into sound. For the first time, people could offer information, or friendship, to others no matter how distant they were.

Who invented the telephone is still debated, as many different people were working in competition with each other at the time. The man who is usually credited is Scottish-born inventor Alexander Graham Bell, whose Patent 174,465 was the first to be issued by the US Patent Office in Washington DC, on March 7, 1876. Returning to his laboratory in Boston, Bell finally managed to get his telephone to work three days later, on Mar 10. He uttered the immortal words, "Mr. Watson, come here. I want to see you," into the transmitter, and his assistant, listening to the receiver in an adjoining room, heard the words clearly.