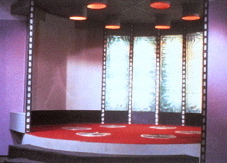 The transporter is a device, first seen aboard the Starship Enterprise in the Star Trek original series, which made the concept of teleportation familiar to a wide audience. "Beam me up, Scotty" became one of the small screen's most oft-repeated lines (though trivia hunters will find that "Beam me up, Mr. Scott" is the closest the show actually came to that immortal line).

In the twenty-third century world of Kirk, Spock, and McCoy, shuttlecraft are used only in special circumstances when beaming someone's molecules around might prove a health hazard. But, ironically, the reason that Trek mastermind Gene Roddenberry chose to equip his starships with "transporters" had less to do with high-tech future possibilities than with low-tech Beatles-era reality. It wasn't feasible, in terms of budget or sixties-level special effects, to show convincingly a spacecraft landing on a different planet every week. Much easier to have a crewmembers shimmer out in one scene, then twinkle back an instant later someplace else. With realistic computer graphics still a couple of decades away, the effect called for plenty of ingenuity and homespun improvisation. The sparkling dematerialization and rematerialization sequences were created by dropping tiny bits of aluminum foil and aluminum perchlorate powder against a black sheet of cardboard, and photographing them illuminated from the side by a bright light. When the characters were filmed walking into the transporter, they stepped on to the pads, Kirk gave the order to energize – and the actors stepped off. In the studio lab, after the film was developed, the actors were superimposed fading out and the fluttering aluminum fading in, or vice versa. By 1994, when production started on the fourth TV incarnation of the franchise, Star Trek Voyager, computer graphics was well into its stride and a new transporter effect was devised in which little spheres of light expand to cover the person, a shower of fading glitter providing a node to the past.

The universe of Star Trek may be only make-believe. The staff at Paramount may have no more idea how to beam a person around than Leonard Nimoy has of performing a mind meld. But the Trek transporter has brought the notion of teleportation into millions of homes worldwide, and given as a common set of images and expectations. Over the course of hundreds of episodes, the transporter's technical specs have been fleshed out and its dramatic possibilities explored in more detail than almost any other device in the history of science fiction.

According to the official bible of Trekana, The Star Trek Encyclopedia, the transporter "briefly converts an object or person into energy, beams that energy to another location, then reassembles the subject into its original form." A little short on detail perhaps for those interested in cobbling together a version of their own to avoid the daily rush hour, but no matter: when facts are hard to come by, there's always technobabble to fill the void.

A key part of the Trek-style transporter is the so-called annular confinement beam (ACB), a cylindrical force field that channels and keeps track of the transportee from source to destination. Basically, this stops your bits and pieces from drifting off into interstellar space while you're being dispatched to the surface of some strange new world. It seems that the ACB first locks onto and then disassembles the subject into an energy- or plasma-like state, known as phased matter. This is a key step in the whole process, so it's unfortunate that the show's creators can't be a little more specific (and win a Nobel prize while they're at it). But what's clear is that some "stuff," be it matter or energy or some hybrid of these, it sent from one place to another, along with instructions needed to reconstitute the subject upon arrival. George O. Smith would have been delighted that his Special Delivery system, or something very much like it, eventually found its way into Hollywood's most celebrated starship.

Imagine, then, that you've stepped onto the transporter pad, issued the fateful command "energize," and had your atoms turned into phased matter. Now you're all set to go. Your matter stream is fed into a pattern buffer (a hyperlarge computer memory that briefly stores your entire atomic blueprint), piped to one of the beam emitters on the hull of the starship, and then relayed to a point on the ground where, all being well, the ACB will put you back together again. There's even a component of the transporter, called the Heisenberg compensator, designed to sidestep one of the most basic laws of quantum physics – Heisenberg's uncertainty principle. This frustrating little rule insists that you can never know exactly where something is and exactly how it's moving at the same time. Unnoticeable in the everyday world, it comes into effect with a vengeance at the subatomic level and, at first sight, seems to pose one of the biggest obstacles to practical teleportation. How can an exact copy of you be made somewhere else if it's impossible to establish the state of every particles in your body at the outset? No problem, according to Mike Okuda, the scenic art supervisor for the Star Trek spinoffs Deep Space Nine, Voyager, and Enterprise. His answer to Heisenberg's uncertainty principle: the Heisenberg compensator. (Once asked how it worked, Okuda replied, "Very well, thank you!")

Anyone wondering whether he or she would have the guts to step up to the transporter plate along with the other crewmembers and be boldly sent needs to bear two thoughts in mind. First, teleportation could probably never work along the lines just described (hint: a "Heisenberg compensator" is physically impossible). second, even in the Star Trek universe, transporters can go wrong. Well, of course they can go wrong – that's part of the fun.

One (or two) of William Shatner's better performances as Kirk came in Star Trek's first-season episode, "The Enemy Within," written by the top-drawer science fiction author Richard Matheson, who also penned some of the more memorable episodes of The Twilight Zone (including "Nightmare at 20,000 Feet" in which Shatner sees a gremlin on the wing of a plane. Having beamed up from a mission on the planet Alpha 177, Kirk feels faint and is helped from the transporter room by Mr. Scott. A moment later a duplicate Kirk appears on the pad. Apparently the magnetic effects of an ore on the planet's surface interfered with the transporter and caused it to split the captain into two selves: one good but incapable of making decisions, the other evil and strong-willed. In this interesting twist on the Jekyll and Hyde theme, it becomes clear that the two halves can't survive apart and that the violent, animal-like component is just as essential in making Kirk an effective leader as his benign side.

Transporter fission turns to fusion in the Voyager episode "Tuvix," when crewmates Tuvok, the Vulcan security officer, and Neelix, the spotty Talaxian, longtime antagonists, are merged during a teleportation into one person. The resulting Tuvix harbors the memories of both progenitors but has a single consciousness. Initially confused and ambivalent, Tuvix eventually carves out a clear identity and personality of his own, and when a means is discovered to undo the mix-up caused by the transporter accident, he objects, not unreasonably, on the grounds that it will kill him. Captain Janeway is faced with the moral dilemma of either ending the brief existence of a distinct, unique individual who has become well-liked among the crew, or denying the rights of Tuvok and Neelix to resume their separate lives. Ensemble casting and contractual arrangements being what they are, Tuvix is consigned to oblivion.

In Star Trek The Next Generation episode "Second Chances," an identical copy of commander Wil Riker is created. Years ago, while a then-lieutenant Riker was beaming up from a planet's surface through severe atmospheric interference, the transporter chief locked on to Riker's signal with a second tracking beam. When this second beam turned out not to be needed, it was abandoned – but not lost. Unbeknownst to everyone on the ship, the ionic disturbance in the atmosphere caused the second beam to be reflected back to the planet and result in the creation of a second Riker. Fast forward eight years and the two Rikers meet. Confusion reigns, Riker-2 gets together with Riker-1's old girlfriend before matters are resolved, and Riker-2 departs to pursue his separate existence.

All good fun, of course – and useful grist for the philosophical mill. But in 1993, as Star Trek began its third incarnation, Deep Space Nine, something happened in the real universe to make beaming up seem just a little less fantastic: plans were published for building the first practical teleporter.


Transporters in the real world

Today, far from being a science fiction dream, teleportation happens routinely in laboratories all around the world. It isn't as dramatic as its Star Trek counterpart – yet. No one has had his or her atoms pulled apart in Seattle and been reconstituted moments later in Seville. The researchers doing this sort of thing aren't mad scientists intent on beaming the molecules of unfortunate animals around the lab and hoping for the best. Instead, real teleporteers belong to a group of computer specialists and physicists who share a common interest. all are involved, in one form or another, with tackling the same questions: How can information be handled at the smallest level of nature? How can messages and data be sent using individual subatomic particles?

Teleportation in the real world means quantum teleportation. Working at the quantum level, it turns out, is the only way to make an exactly perfect copy of the original. So, to understand how teleportation works means taking a trip into the weird world of quantum mechanics. It means looking at how light and matter behave at an ultra-small scale, where extraordinary things are commonplace, and common sense goes out the window.

Actual teleportation, as it's done at present, doesn't involve a flow of matter or energy. It doesn't work by streaming atoms, or any other kind of physical "stuff," from one place to another like the Enterprise's transporter. The basis of true teleportation is transferring information without sending it through ordinary space. It's a transfer achieved with the help of the strangest, most mysterious phenomenon in all of science: entanglement. A bizarre shifting of physical characteristics between nature's tiniest particles, no far apart they are, entanglement lies at the heart of teleportation as well as two other major new fields of research: quantum cryptography and quantum computation.

For now, the most we can teleport is light beams, subatomic particles, and quantum properties of atoms, rather than solid objects. But scientists are talking about teleporting molecules sometime within the next decade. Beyond that there's the prospect of doing the same with larger inanimate things. And beyond that ...