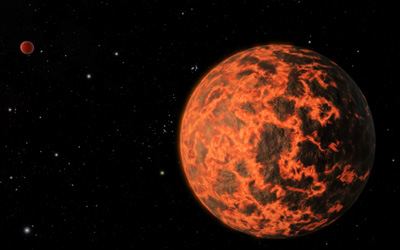 UCF-1.01 is a candidate for being the nearest exoplanet to us that is smaller than Earth. It orbits around the red dwarf GJ 436, which lies 33 light-years away in the constellation Leo. A Neptune-sized world, GJ 436b, was already known to exist in this system. In fact, it was while carrying out observations of the larger planet using the Spitzer Space Telescope that UCF-1.01 was detected.

In the infrared light coming from the red dwarf, astronomers saw slight dips which were distinct from the dips caused by the passage of the larger planet in front of the red dwarf. These secondary dips were periodic in nature, implying that they were caused by a smaller planet moving around GJ 436 in a very tight orbit. How long the little dips last and how deep they are, reveals some basic facts about the new world. It is a mere 8,400 km (5,200 miles) across – two-thirds the size of Earth – and has a year last only 1.4 Earth days. Its distance from the red dwarf is only seven times the distance from the Earth to the Moon, so that, even though GJ 436, is a relatively cool, dim star, the surface of UCF-1.01 must sizzle at a temperature of more than 1,000 °F. No small planet so hot could hold on to an atmosphere. Think of a larger, hotter version of Mercury. According to one of the astronomers who made the discovery, the heat on UCF-1.01 might be so intense than the surface is covered by an ocean of magma.

More work will be needed to confirm the discovery. Meanwhile, the Spitzer's measurements contain hints of a third planet – also smaller than Earth – called UCF-1.02. But until the mass of either of these worlds cam be measured these findings will remain unconfirmed.