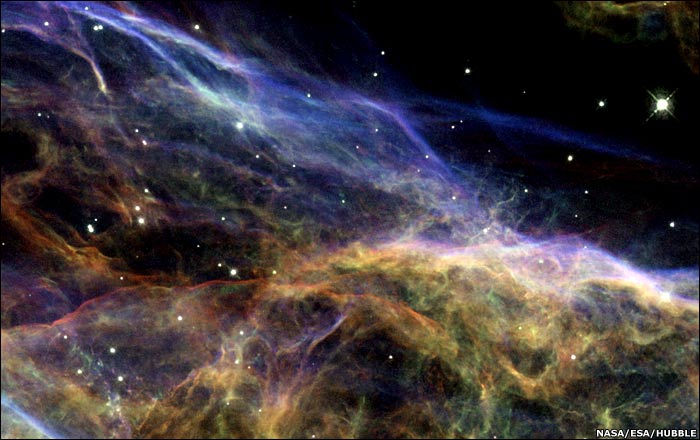 A portion of the Veil Nebula imaged by the Hubble Space Telescope. 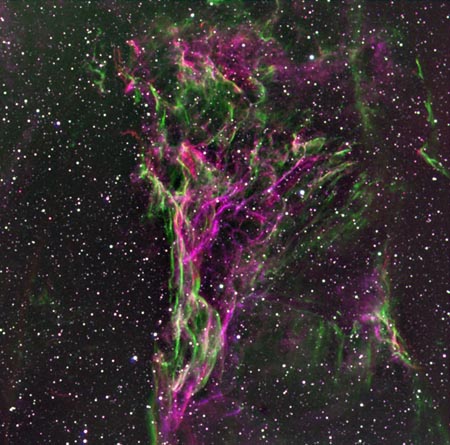 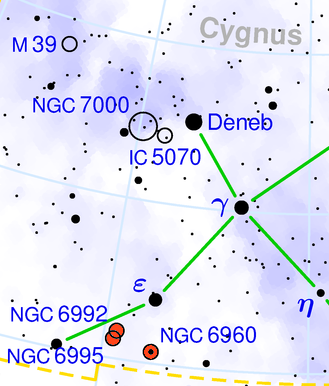 So large is the Veil – six times the diameter of the full Moon – that to earlier observers its brighter portions were treated as distinct diffuse nebulae and given different NGC numbers. The most prominent is the eastern portion, which is catalogued as NGC 6992 (Cederblad 182B). This can be seen in binoculars from a dark site as a long, curving hazy streak of light. The next most prominent part is NGC 6960, lying to the west, close to line of sight of the magnitude 4 star 52 Cygni; it is also known as the Filamentary Nebula or LBN 191. NGC 6960 can be observed in a 6-inch telescope under dark skies as a faint haze. Other major portions are NGC 6979, the northern part of which has a fainter extension known as NGC 6974, and 6995, which has an appendix to the southwest called IC 1340. Still other faint luminous material can be found throughout the Veil's expanse. For example, a patch of nebulosity above and to the left of NGC 6960 is known as Pickering's Triangle or, more prosaically, as Simeis 3-188.

Until a few years ago, astronomers placed the Cygnus Loop, and therefore the Veil Nebula, more than 2,500 light-years distant. In 1999, astronomers using the Hubble Space Telescope revised that estimate to 40% closer, or 1,470 light-years. Nevertheless, uncertainties and assumptions used in making that estimate left some researchers unpersuaded. In 2003, a team of researchers used data from the FUSE satellite to measure accurately the distance to a star lying behind the Loop; this value, of 1,860 light-years, places an upper boundary on the distance to the Loop and provides an independent confirmation of the shorter distance scale.