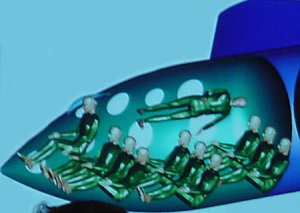 Virgin Galactic spaceship is a suborbital space plane being developed by Scaled Composites, which will become a passenger-carrying successor to SpaceShipOne. Richard Branson's Virgin Galactic has announced that it will operate a fleet of five of these craft plus two motherships (called WhiteKnightTwo or "Eve", after Branson's mother), initially from the Mojave desert, but eventually out of the soon-to-be-built Spaceport America.

The Virgin Galactic spaceship, also known as SpaceShipTwo, will fly higher and have a longer downrange than SpaceShipOne. Maximum altitude is expected to be 84-87 miles (135-140 km) and downrange will be 100–200 miles (160–320 km). The maximum capacity will be six paying passengers and two pilots. It is thought that the Virgin Galactic spaceship's crew cabin will have about the same diameter as a Gulfstream V business jet – 6 ft high and 7 ft wide. Large portholes will allow passengers panoramic views, and all seats will recline during launch to help ameliorate the effects of g-forces. Passengers will be able to fly without the aid of pressure suits and the experience will be similar to a high-altitude passenger jet. Both the Virgin Galactic spaceship and its carrier aircraft, Eve (or White Knight Two), will be roughly twice the size of the first generation spacecraft and mothership that won the Ansari X Prize.

Construction of the Virgin Galactic spaceship began in 2006 and the first test flights of the mothership Eve will take place in the second half of 2008. No date has been set yet for the first commercial flights of paying customers. In August 2005, the president of Virgin Galactic stated that if the commercial suborbital service is successful, the next generation vehicle would be an orbital craft.