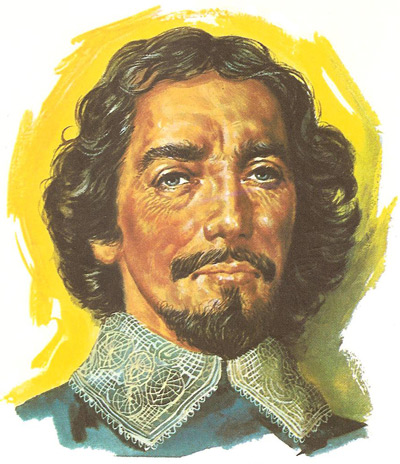 Even two teams of powerful horses could scarcely pull the hemispheres apart. The pressure of the air outside, far greater than that within the sphere, held the two halves together. 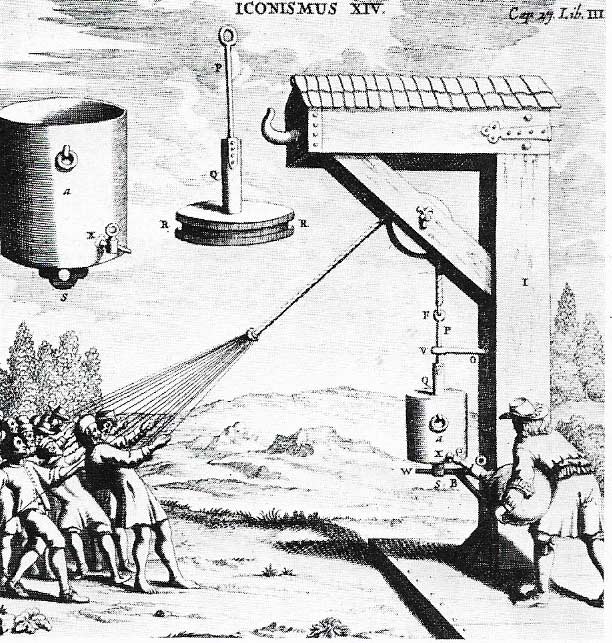 At Ratisbon in 1654. A group of more than 50 men are trying to pull a plunger out of a cylinder from which the air has been exhausted. This is taken from von Guericke's book Experimenta Nova..

Otto von Guericke was an amateur scientist who served as burgomaster (mayor) of the town of Magdeburg. His fame rests as the creator of one of the most spectacular experiments in the early history of science.

Von Guericke lived at a time of growing interest in the pressure of air and vacuum. Galileo had dabbled before him in this branch of science, as had Galileo's fellow countryman Evangelista Torricelli. The latter managed to produce a vacuum in the space within the closed (top) end of an upright tube filled with mercury. He noticed that the vacuum apparently held the mercury up in the tube. About 1650, von Guericke invented the first practical air-pump, capable of removing air from an enclosed space to produce a near vacuum.

Then, in 1654, came von Guericke's greatest experiment. He made two metal hemispheres – hollow half-globes – put them together and pumped all the air from between them. The force of the air pressing from the outside greatly exceeded that of the very small pressures of the near vacuum within. To prove just how great was the force needed to part the hemispheres, because of the pressure of the outside air holding them together, the scientist obtained sixteen horses, dividing them into two teams, and hitched one team to each of the hemispheres. Pulling as hard as they could, the combined strength of all sixteen horses was scarcely great enough to force them apart.

This experiment lost nothing in spectacle by being performed at Regensburg before the court of Emperor Ferdinand III. As a result of the 'Magdeburg hemispheres' experiment, scientists came to realize far more the importance of pressures of the atmosphere.

The inquiring mind of Otto von Guericke did not confine itself only to studies in pressure. He also made an early electric machine, and conducted experiments in a wide variety of scientific fields.