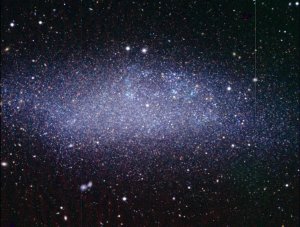 The Wolf-Lundmark-Melotte Galaxy (WLM Galaxy) is a dwarf, irregular galaxy in the constellation Cetus that is a remote member of the Local Group. Although discovered in 1909 by Max Wolf, its nature as a galaxy was only established in 1926 by Knut Lundmark and Philibert Jacques Melotte (1880–1961). Not only is WLM at the frontier of the Local Group, but it is also very isolated – its nearest neighbor, the dwarf galaxy IC 1613, a full million light-years away. Quite elongated, with a largest extension of more than 8,000 light-years, WLM is about 12 times smaller than the Milky Way. Yet the discovery around it of many outlying red stars suggests that even such galactic minnows may have haloes and that WLM may be similar to our own galaxy in age.