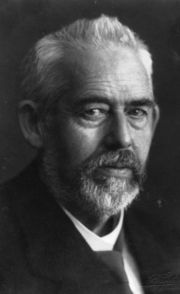 Max Wolf was a German astronomer who was a pioneer of astrophotography. He developed the dry plate in 1880 and the blink comparator in 1900, and, with such tools, discovered hundreds of variable stars and asteroids, and about 5,000 nebulae. Between 1919 and 1931, he searched for high proper motion stars, which tend to be relatively close by, and produced a catalogue of 1,566 such objects.

Wolf earned his PhD at the University of Heidelberg, studied in Stockholm for two years, and then returned to spend the rest of his life at Heidelberg, where he founded and directed the Königstuhl Observatory and served as professor of astrophysics. He used wide-field photography to study the Milky Way and used statistical analyses of star counts to prove the existence of clouds of dark matter. He was among the first to show that spiral "nebulae" (now known to be galaxies) have absorption spectra typical of stars and thus differ from gaseous nebulae.

Among his asteroid discoveries was 323 Brucia (named after the benefactress who paid for his telescope), the first asteroid to be found using photography (1891), and Achilles, the first found Trojan. Wolf also suggested the idea of the modern planetarium while advising on the new Deutsches Museum in Munich.