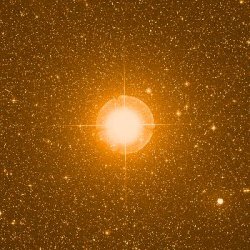 Wezen (Delta Canis Majoris) is the second brightest star in the constellation Canis Major. Its Arabic name, which means "weight," is of uncertain origin but is appropriate in view of Wezen's great mass and size. An unusual yellow F-type supergiant, it would almost fill Earth's orbit if put in place of the Sun.

Wezen is only about 10 million years old but has already stopped fusing hydrogen in its core. The core is now contracting and heating, and will trigger helium fusion in less than 100,000 years, when the outer part of the star has become a red supergiant similar to Antares.