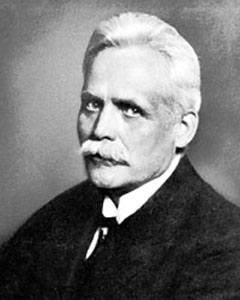 Wilhelm Wien was a Prussian-born German physicist best known for his work on blackbody radiation, which later formed one of the cornerstones of Planck's quantum theory (see Planck and the origins of quantum theory). He received the 1911 Nobel Prize in Physics for his displacement law concerning the radiation emitted by a blackbody, which he discovered in 1893.

While studying streams of ionized gas, in 1898, Wien laid the foundation of mass spectroscopy and identified a positive particle equal in mass to the hydrogen atom. J. J. Thomson refined Wien's apparatus and conducted further experiments in 1913. After work by Ernest Rutherford in 1919, Wien's particle was accepted and named the proton. Wien also made important contributions to the study of cathode rays, X-rays, and "canal" rays.