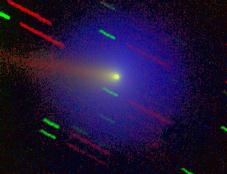 Comet Wirtanen is a Jupiter-type comet discovered in 1948 at the Lick Observatory by Carl A. Wirtanen. Its orbit takes almost to as close to the Sun as Earth, and almost as far away as Jupiter. Comet Wirtanen was to have been the target for the Rosetta probe; however, the target comet was changed following a delay in the spacecraft's launch.