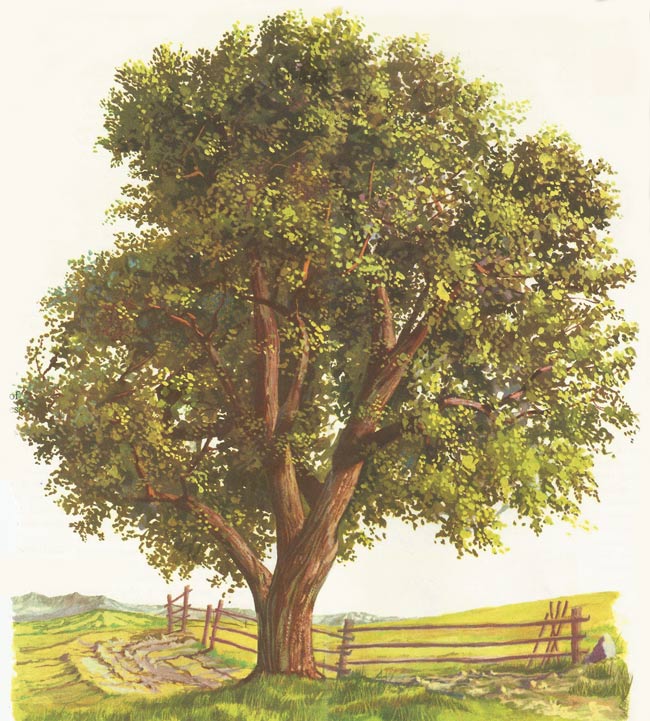 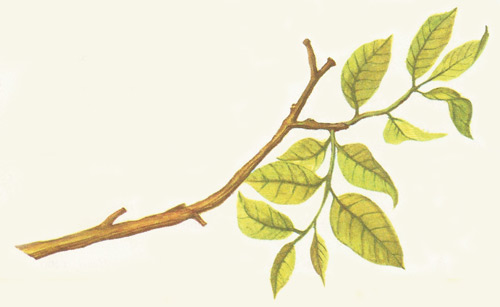 A walnut twig with leaves. 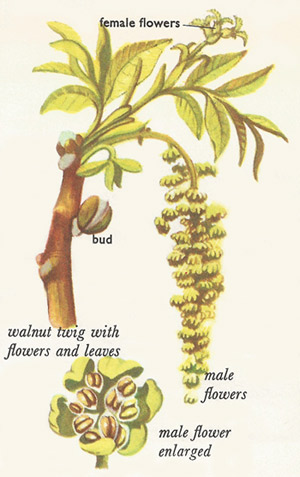 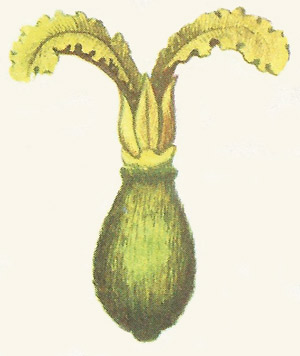 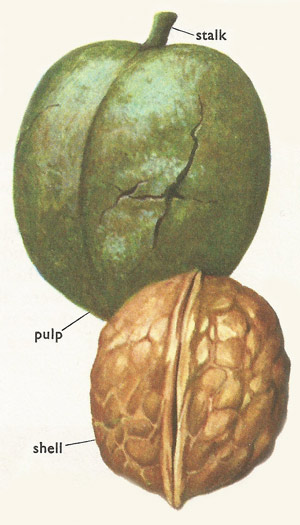 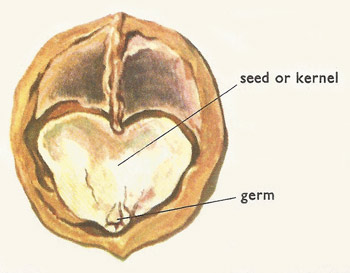 Cross-section of a walnut.

Walnuts have been cultivated for so many centuries that it is not certain where they originally came from. The trees are found throughout temperate Asia, and their original home was probably somewhere in that continent. They are not native to western Europe, but were introduced in early historic times. The Romans may have brought them to Britain.

When fresh, ripe walnuts are handled, they leave a dark stain on the fingers. This is because the layer of pulp that surrounds them contains tannin, and this turns almost black when exposed to the air.

The walnut tree may reach a height of between 100 and 150 ft, but most garden walnuts are much smaller. The tree has a pale-gray bark, which is smooth when the tree is young; with increasing age the bark becomes fissured (cracked). The tree is not only valued for its fruit and for its wood, but also for its beauty.

The walnut requires a temperate climate; it will grow at heights of 3,000 to 4,000 ft in Europe, and in southern China up to 8,000 ft. It does best in well-drained soil with a substratum of chalk or sand.

Walnuts are propagated by seed, and also by grafting when a particular variety or strain is required. In Britain a tree grown from seed will usually not bear fruits until it is about 10 yr old; if it is grown from a graft it will bear when it is 2–3 years old.

The leaves are pinnate, which means that they consist of an uneven number (5 to 7) of separate leaflets. These are large and smooth and oval in shape, and the edges are entire, not toothed.

When crushed, the leaves have a pleasant, slightly astringent smell.

The walnut is monoecious; the male and female flowers are separate but are borne on the same tree (from the Greek monos, meaning single, and oikos, a house, indicating that both kinds of flower 'live in one house').

The flowers are small and green, so that one hardly notices when the tree is flowering, which it does in the late spring. The pollen is carried by the wind, so there is no need to attract insects by means of conspicuous or strongly scented flowers.

The female flowers grow in groups of 2 to 4 at the tips of the youngest shoots. After pollination their carpels swell and ripen, and each one forms a walnut. The male flowers are small hanging catkins on the twigs which are one year old.

At first they are green, but darken and fall off after shedding the pollen.

The walnut is a drupe, or stone-fruit, like a plum, the nut corresponding to the plum stone. The fleshy part is made up of the epicarp and mesocarp; the shell of the nut is the endocarp. Inside is the seed. We eat the mesocarp of a plum; in a walnut we eat the seed.

The fruit ripens at the end of Sep and in Oct, when the hulls, or fleshy coverings, begin to dry and split open. Harvesting is started as soon as the hulls are open and is usually carried out by beating the branches with long poles, so that the fruit falls.

Once the nuts have been gathered, the hulls quickly dry and come away from the shells, and the nuts are dried before being packed.

Most walnuts come from California in the United States. Italy, Franc,e and the Balkan countries also grow large quantities.

There are about 17 different species, the best known of which is Juglans regia, sometimes called the Persian (or English) walnut. Several other species are found in North America.

The most important of these is the black walnut, Juglans nigra. This grows larger than any other walnut tree, and is valued for its timber. The wood is used in particular for the manufacture of stocks for guns and rifles. Compared with other woods, walnut does not warp.

The dried nuts are delicious and are popular as dessert. They are highly nutritious and contain 50 per cent of oil. They are also rich in vitamins B and C.

The hickory trees of the genus Carya are allied to walnuts and included in the Juglandaceae. They are native to North America, and are valued both for their timber and nuts, which are called pecans.