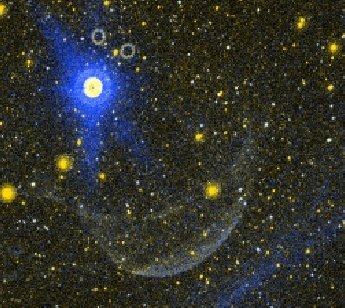 Ultraviolet GALEX image showing Z Cam as the bright star at upper left, and material ejected hundreds or thousands of years ago during the last nova eruption of Z Cam.

A Z Camelopardalis star belongs to one of three subcategories of U Geminorum stars (dwarf novae), the others being SS Cygni stars and SU Ursae Majoris stars. Z Cam stars are distinguished by, in addition to normal U Gem-type outbursts (which consist of a rise from quiescence of 2–6 magnitudes and 1–3 day durations), random standstills. A standstill usually starts at the end of an outburst and consists of a period of constant brightness, about one magnitude below maximum light, which may last from a few days to 1,000 days. The average energy output in a standstill is larger than that during an outburst cycle. Standstills occur when the mass transfer rate from the secondary star into the accretion disk around the primary star is too large to produce normal outbursts.

The prototype system, Z Camelopardalis, lies about 530 light years from Earth and was the first dwarf nova ever detected. It consists of a G-type (Sun-like) dwarf and a white dwarf or a blue subdwarf that orbit around each other every 7 hr 21 min; eruptions occur on average every 20 days.

Theory predicts that the white dwarfs in all dwarf novae must eventually accrete enough mass to undergo classical nova eruptions, but no dwarf nova has ever been shown to have undergone a classical nova eruption – with the exception of Z Cam. In a Letter to the Editor, published in Nature in July 2007, Göran Johansson, of the University of Lund, Sweden, pointed out that an eruption of Z Cam had been recorded by the Chinese in 77 BC.1

Observations by the NASA ultraviolet satellite GALEX have revealed the shell of Z Camelopardalis. This shell is about 10 times more extended than any detected around any classical nova. The derived shell mass matches that of classical novae, and is inconsistent with the mass expected from a steady dwarf nova wind. Thus the shell mass and morphology observationally link, for the first time, a dwarf nova with the classical nova process, just as theory predicts.

A UX Ursae Majoris star is a nova-like variable that may be a Z Camelopardalis star with a very long standstill.