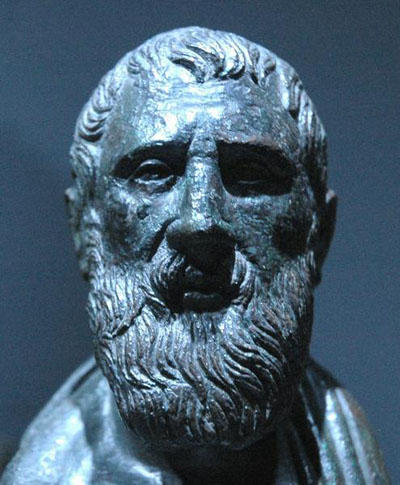 Zeno of Elea was a Greek philosopher and member of the Eleatic school. Zeno is most important for his four paradoxes (see below, the best known of which are the "Achilles and tortoise" paradox (in a race, the tortoise is given a start: by the time Achilles reaches the point where the tortoise was, the tortoise has advanced – therefore Achilles can never overtake the tortoise) and the "arrow" paradox (at any instant in its flight an arrow is in only one place, and therefore at rest – therefore the arrow cannot move).

Zeno flourished in the 5th century BC at Elea, a town of Lucania, in Italy. A favorite disciple of Parmenides, he came with him to Athens, where Pericles became one of his pupils. According to the account usually given, on his return to Elea he joined an unsuccessful conspiracy to take his native town from the tyrant Nearchus, and was subsequently tortured to make him betray his accomplices. To ensure his silence he is said to have bitten off his tongue and spat it in the tyrant's face.

Zeno held the usual doctrines of the Eleatic school respecting the unity and the immutability of all things, distrust in knowledge acquired through the senses, and reliance on pure reason. He did not deny that there were phenomena or appearances, but he maintained that these had no real existence, in anticipation of the philosophy of Berkeley.

In addition to his four paradoxes, he is remembered for having been the first to employ the style of argument known as dialectics, in which error is refuted, and truth sought to be established, by reduction ad absurdum – a method used so skillfully afterwards by Socrates and Plato. He devoted his powers of argument to enforce doctrines first broached by Xenophanes, and more systematically by Parmenides.

His works were in prose, but only small fragments have been preserved.

Zeno's paradoxes are a series of paradoxes posed by Zeno. He was born in Elea (now Lucania) in southern Italy and was a friend and student of Parmenides. Although hardly any of his writings survive, he's known to have written a book, which Proclus says contained 40 paradoxes. Four of these, which all concern motion, have had a profound influence on the development of mathematics. They are described in Aristotle's great work Physics and are called the Dichotomy, Achilles (and the Tortoise), the Arrow, and the Stadium.

The Dichotomy argues that: "there is no motion because that which is moved must arrive at the middle of its course before it arrives at the end." In order the traverse a line segment it's necessary to reach the halfway point, but this requires first reach the 1/4-way point, which first requires reaching the 1/8-way point, and so on without end. Hence motion can never begin. This problem isn't alleviated by the well known infinite sum 1/2 + 1/4 + 1/8 + ... = 1 because Zeno is effectively insisting that the sum be tackled in the reverse direction. What is the first term in such a series?

Zeno's paradox of Achilles is told by Aristotle in this way: "The slower when running will never be overtaken by the quicker; for that which is pursuing must first reach the point from which that which is fleeing started, so that the slower must necessarily always be some distance ahead." Thus, Achilles, however fast he runs, will never catch the plodding Tortoise who started first. And yet, of course, in the real world, faster things do overtake slower ones. So how is the paradox to be solved? The German set theorist Adolf Frankel (1891–1965) is one of many modern mathematicians (Bertrand Russell is another) who have pointed out that 2,000 years of attempted explanations have not cleared away the mysteries of Zeno's paradoxes:

Although they have often been dismissed as logical nonsense, many attempts have also been made to dispose of them by means of mathematical theorems, such as the theory of convergent series or the theory of sets. In the end, however, the difficulties inherent in his arguments have always come back with a vengeance, for the human mind is so constructed that it can look at a continuum in two ways that are not quite reconcilable.

The paradox of the arrow is a thought experiment that challenges common sense notions of time and movement. When an arrow is shot from a bow, it appears obvious that the flying arrow moves. But Zeno denies it is ever in motion. He invites us to look at the arrow at any moment during its flight – as it were, freezing the frame. We will see that, in that instant, the arrow is at rest, statically occupying its place in space, no more no less. But the flight of the arrow is simply a succession of instants. Since in every single instant the arrow is immobile, there is never an instant when it is in motion. Our impression of the arrow moving is therefore an illusion, according to Zeno.

The implications of Zeno's vision are radical. If time is a series of static, unconnected moments, then in reality the world is unchanging and eternal, without past or future. A sensible person is, of course, loath to accept such notions. One solution to Zeno's arrow paradox seemed obvious to Aristotle. He argued that there were no "instants" of time. As he put it, "Time is not composed of indivisible moments." In other words, time flows continuously, like a stream, from past into the future, freeing the arrow to fly to its target. But British philosopher Bertrand Russell, in the early twentieth century, accepted Zeno's arrow paradox as "a very plain statement of a very elementary fact."