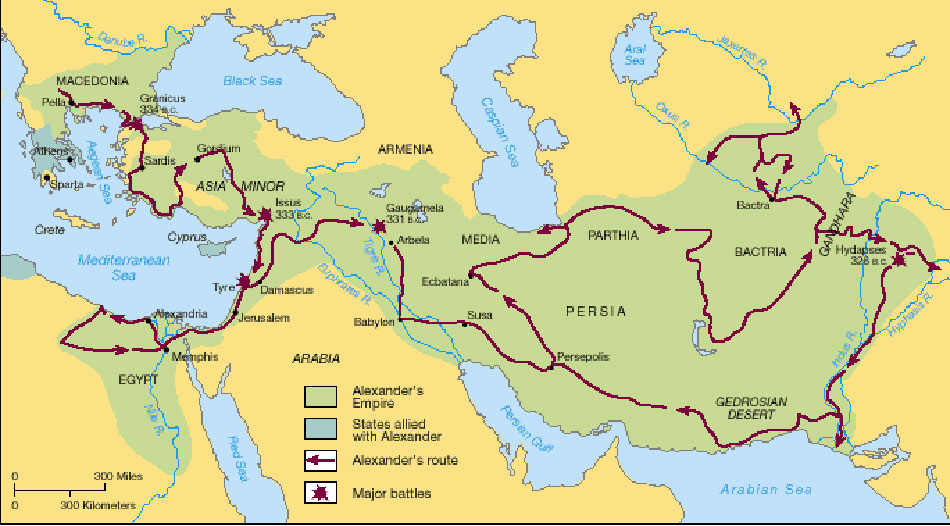 Map of Alexander's journey through the Persian Empire to India and back. 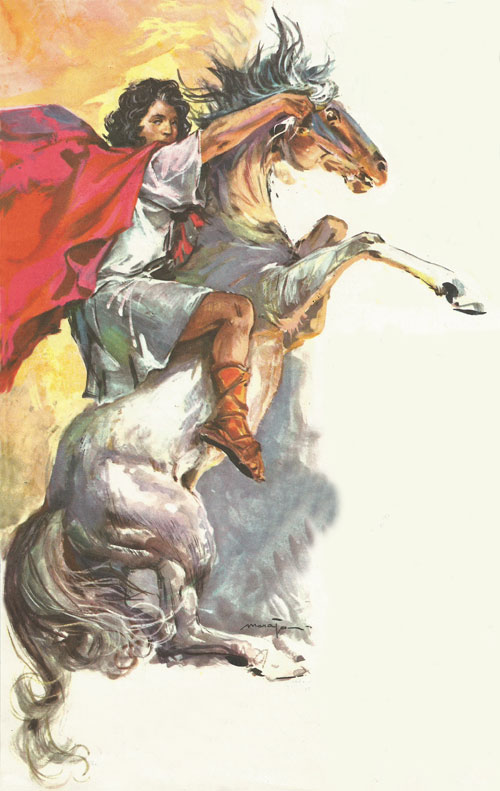 Alexander, as a boy of fourteen, tames the wild horse Bucephalus which no one else could master. He rode Bucephalus in all his battles, and when the horse died of wounds, in India, he built a town and named it after him. 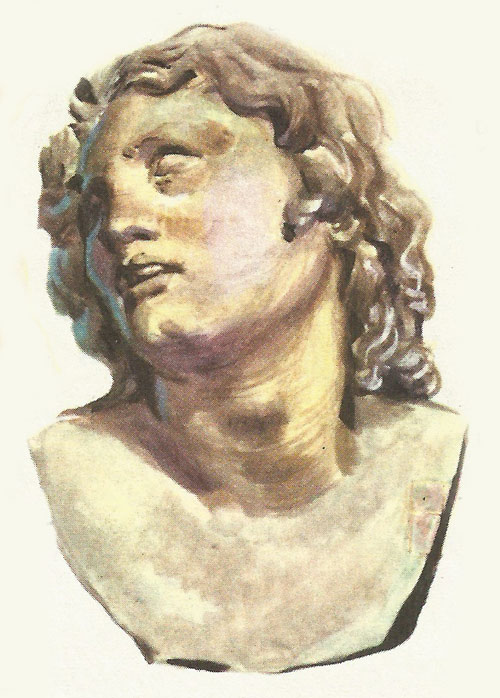 There is still wonder in the name of Alexander the Great, who conquered the ancient world in nine triumphant years, and died in Babylon over 2,000 years ago at the age of thirty-three. He remains a legend in Europe and Asia, where he is remembered as a great soldier.

His empire, stretching from Greece to India, disappeared after his death. But the cities that he founded (some chronicles say there were 70 of them) lived on; their citizens spoke Greek and kept Greek ideas alive. Through Alexander's conquests Greek culture was diffused, south into Egypt, east into Asia. It was a two-way traffic, for Alexander discovered that Persia and India possessed ancient civilizations from which the Greeks could learn much. Since Alexander, Greek civilization has been called Hellenic, a wider term which includes Oriental ideas.

Alexander's father, Philip, became King of Macedonia in 359 BC. The people of this small country in northern Greece were crude and uneducated compared to the Athenians, but they were tough fighters. Philip made his army the finest military force of the age and forced the Greek states to accept him as ruler; Athens and Sparta were too exhausted by fighting each other to unite against Macedonia. Philip was planning an invasion of the great Persian empire, the ancient enemy of Greece, but he was murdered in 336 BC in a palace conspiracy, and his son Alexander became King at the age of twenty.

Alexander had received a practical training in warfare from Philip, and a Greek education from the great philosopher Aristotle who, in Alexander's own words, taught him how to think. His favourite book was Homer's Iliad.

On Philip's death, a serious revolt broke out in Thebes, and in Athens the famous orator Demosthenes urged the Athenians to rebel against Macedonia. Alexander restored order by making an example of Thebes. The city was completely destroyed and the Thebans killed or sold into slavery. No Greek city ever rose again against Alexander.


The conquest of Asia

The young King was now free to attack the Persian Empire, ruled by Darius 111. In the spring of 334 BC he crossed the Hellespont into Asia.

The Persians could raise a million men and more, but their armies lacked the training and, above all, the leadership of the Macedonians. Alexander was a master in the art of war and utterly fearless in battle. Commanded by him, the Macedonian phalanx, or massed infantry carrying spears, proved invincible.

The first battle, at the River Granicus, was a complete victory for Alexander, who led the attack, plunging into the river on his great horse Bucephalus.

A second battle at Issus in 333 BC ended in total defeat for the Persians. King Darius fled, abandoning his family, who were treated kindly by Alexander. After the battle Alexander sent presents to his mother, Queen Olympias, of whom he was very fond.

Alexander had to destroy the Persian sea power before it was safe for him to march further into Asia. He besieged the great seaport of Tyre, which fell after seven months; next Gaza, Samson's city, was captured.

He entered Egypt, which had been ruled by Persia for 200 years, and many Egyptians welcomed him as a deliverer. At the mouth of the Nile he founded Alexandria, which was to become famous as a center of learning with its magnificent library, and as a seaport. He also sent an expedition into Ethiopia to discover the source of the Nile and visited the desert temple of Zeus-Ammon, where the priests hailed him as the son of Zeus.

The following year, in 331 BC, Alexander continued the conquest of Persia. The armies met at Gaugamela, near Arbela (modern Erbil, in Iraq). Darius had assembled a huge army of over 1,000,000, including chariots with scythes attached to their wheels. Alexander's total strength is thought to have been 7,000 cavalry and 40,000 infantry. The Persians could not stand up to the Macedonian charge. Again Darius fled, leaving his troops to struggle on bravely but in vain. He was later found, murdered by his own officers.

When Alexander had first come to Asia Minor he visited Phrygia. There he had been shown the chariot of the ancient king Gordius and been told of the legend, according to which rule the world. Alexander seized a sword and sliced the knot in half; now he was making the legend come true.

Alexander was now King of Macedonia, Greece, Egypt, Persia, and Asia – half the known world. For six more years his army marched on, exploring and conquering, before turning homewards. The distances Alexander covered are astonishing, especially in an age without maps; from Persepolis, the Persian capital, to the Caspian Sea; to remote Afghanistan and the inaccessible Hindu Kush; north again to Samarkand and Tashkent in Central Asia; then south-east to Khyber Pass and into India.

Alexander's way of life changed during these years in Asia. He began to behave more like an Oriental despot than a Greek, wearing Persian dress and living in luxury. He encouraged his Macedonians to marry Asiatic girls, and chose 30,000 boys from all parts of Asia to be trained as Greek soldiers. He married a rich and beautiful princess, Roxana, from Bactria, in Central Asia. His marriage was happy, and his vision of greater unity between East and West was noble and far-sighted. However, the radiance of Alexander's youth was clouding over. Dark suspicions of treachery made him turn against his old and faithful Greek friends. In a fit of rage he killed Clitus, who had saved his life in battle, and imprisoned Callisthenes because he refused to prostrate himself in the King's presence.

Alexander's ambition and his passion for discovery were as strong as ever. After crossing the northwest frontier into India, he marched through the Punjab to the river Hydaspes. Here his great battle was fought and won against the brave Indian King Porus. Alexander hoped to reach the river Ganges, but when his soldiers reached the river Beas they refused to go on. They had marched 11,000 miles and had not seen their homes for eight years. Plutarch said of the Macedonians; 'India killed their hearts'.


The return to Babylon

For once Alexander's charm and powers of persuasion failed to move his army, and the long march home began. The Macedonians never lost a battle and never failed in loyalty to Alexander, but many died of exhaustion and thirst on their journey through the terrible deserts to Baluchistan and, at last, Persia.

Alexander's health was breaking down, though he was still a young man, with an active mind and imagination. He was planning further conquests in Arabia, and also a coastal survey of the Persian Gulf, when fever struck him down in June 323 BC. As he lay dying, his soldiers, broken-hearted, filed past him, and he seemed to recognise each man.

Beautiful as a Greek god, brilliantly intelligent, generous to his friends and often to his enemies. 'Never in all the world', writes Arrian, 'was another like him' and, 'He is held as no mere man could be in honour and remembrance'.

Alexander, as a boy of fourteen, tames the wild horse Bucephalus which no one else could master. He rode Bucephalus in all his battles, and when the horse died of wounds, in India, he built a town and named it after him.