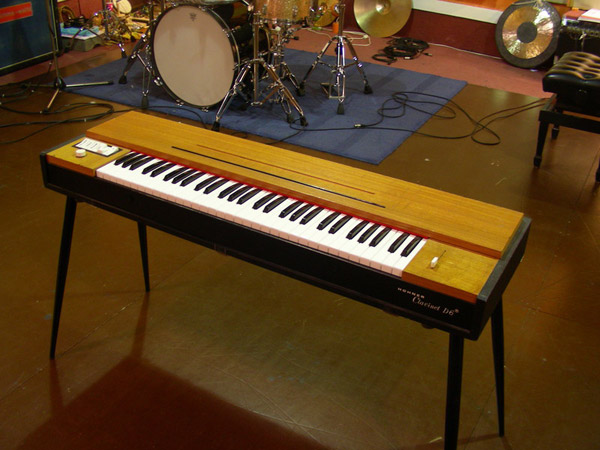 A clavinet is an electromechanical keyboard instrument that is essentially an electrically amplified version of the clavichord. It was designed in the early 1960s by Ernst Zacharias of the German company Hohner. The clavinet evolved from the Cembalet, an instrument Zacharias had developed some years earlier as an electronic counterpart to the harpsichord. Various models were produced between 1964 and the early 1980s, including the clavinet, II, L, C, D6, E7, and Duo.

Most models featured a 60-key, five-octave keyboard, spanning a range from F1 to E6. The sound came from tensioned steel strings struck by small, rubber-tipped hammers, or "tangents", and was amplified by means of pickups – like those of an electric guitar – positioned above and below the strings. Indeed, the instrument produced a guitar-level signal and was usually amplified through a guitar amp. The characteristic staccato sound was due to a weave of yarn through which each string passed.

A string could vibrate as long as the key was depressed, but upon release the string was immediately damped by the yarn. A series of pickup selector rocker switches to the left of the keyboard enabled the player to alter the tone of the instrument, making it rich and full or thin and biting. Other controls included overall brightness and volume settings. The sound of the clavinet was often further modified by passing its output through guitar effects – such as a wah-wah pedal – prior to amplification.

The clavinet's distinctively bright percussive sound ensured that the instrument became a favorite of funk and rock music. John Paul Jones of Led Zeppelin used the instrument extensively on the Physical Graffiti album, but perhaps the clavinet's defining moment was its use in Stevie Wonder's "Superstition".