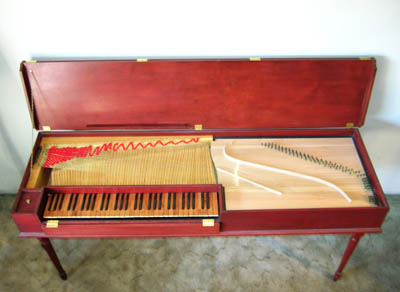 The clavichord is the earliest stringed musical instrument with mechanical action controlled by a keyboard. Originating in the late fourteenth century, or possibly earlier, it was used extensively from the sixteenth to the eighteenth centuries. It has a soft, delicate, expressive tone and is the most touch-responsive keyboard instrument ever devised; a sort of prolongation of a note, called bebung (German: "trembling"), is a characteristic effect. The clavichord was superceded by the harpsichord and then by the piano.

The clavichord looks like a small rectangular piano – often in the form of a box to be placed on a table but sometimes having legs: a long side of the rectangle, into which the keyboard is set, faces the player and the strings, generally in pairs, run horizontally parallel with that side. It ranges in length from four feet (common) to seven (a late eighteenth-century development, spurred by the development of the piano).

The method of tone-production is not, as with the harpsichord and spinet, by plucking, or, as with the piano, by hammering, but by a sort of pressure stroke from below, by small pieces of metal called tangents. A peculiarity of these is that they are not only agents setting the strings in vibration but also agents in "stopping" the strings. The point where a tangent touches on the string is the point at which the string should be stopped in order to produce the required note: the string is thus divided into two portions by the tangent but only the longer portion can vibrate, the other end of the string being permanently damped by a piece of felt.

Since the pitch is determined not by the length of the strings, as it is in the piano, but by the distance between the tangent and the bridge, it was frequent practice to assign two, or even three, notes to any given pair of strings. In such models, which prevailed up to about 1730, the tangents were operated by two or more adjacent finger-keys that might share a string, each meeting it at the exact point called for by the note associated with one of the finger-keys in operation. (It follows from this that the notes represented by such associated finger-keys could not be obtained simultaneously.) By going for notes unlikely ever to be sounded simultaneous;y – C and C sharp, for example – makers could economize on the size and hardware of the instrument , crucial to the majority of buyers, whose homes would not easily accommodate a harpsichord. This type of clavichord was called fretted – presumably by analogy with the same word as applied to viols and lutes, etc.

In the mid- to late-eighteenth century, clavichords were often built with a separate pair of strings for each key. Some instruments were built with two manuals – effectively one clavichord on top of another and a pedal keyboard, for the practice use of organists. These later examples, in which every finger-key was assigned to its own string, were described as unfretted.

The piano's range of dynamics and tone colors is vastly greater than that of the clavichord, but once depressed and the hammer has hit the string, there is little or nothing the finger can do to affect the sound.

On the clavichord, the strings are set in vibration not by a hammer but a tangent, which remains in contact with the string or strings it has set in motion for the duration of the sound. Its tone is small, but through deft manipulation of finger pressure it can be made to swell or diminish, to achieve a true vibrato, even to change its pitch. The clavichord is the only traditional instrument in which the afterlife of a tone, once struck, can be substantially affected by finger pressure alone (the slightest fluctuation in touch will clearly register a difference in loudness or pitch). It is thus the only keyboard instrument that allows vibrato and can thus emulate the contours of the human voice, with all its subtlety of inflection.


The rise and fall and rise of the clavichord

The original period of popularity of the clavichord was an extended one – from the fourteenth century to the end of the eighteenth century or a little later. With all its subtleties, it is small wonder that the clavichord was so beloved of Bach (who prized 'singingness" above all other musical virtues), and of Mozart and Beethoven after him – despite their ownership and mastery of the latest pianos. Until the advent of the electronic piano, with its attendant headphones, the clavichord remained the most intimate of all instrument, its sound so small that it can be played late at night with no fear of waking any but the lightest sleeper, in the same room. This, combined with its supreme sensitivity, explains why it was dubbed by one eighteenth-centry lady, 'that thrilling confidante of solitude'.

The clavichord and the harpsichord, less sensitive, but more varied in tone quality and more powerful, existed side by side from the beginning of the sixteenth century onward. During the tentieth century the clavichord started to come into use again.