drums of the Middle East 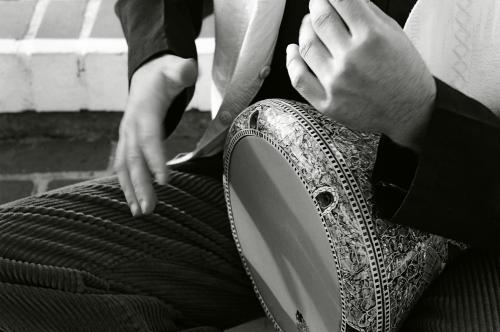 The dumbek gets its name from the two main sounds of the instrument: the dum (its center) and the bek (its rim).

The dumbek is a goblet drum, 10–22 centimeters (4–9 inches) in diameter and 22–40 centimeters (/9–16 inches) long) It has a hollow pottery, wood, or metal body and a goatskin or fish-skin head. There are many regional variations in its name, including derbrocka (Morocco and Algeria), darbukkah, and derbouka (Iraq), and zarb (Iran).

Archeological evidence suggests that the daf and riq were the chief percussion instruments for much of recorded history in the Middle East, with the dumbek becoming popular only in the 20th century. When playing the dumbek and frame drums, the dominant hand plays most of the rhythm, as the other hand holds the drum and adds in light fills. The dumbek is played by holding the drum under the left or non-dominant hand arm with the head facing downward, and striking the head with the fingers of both hands.

Rhythms are vocalized in the dumbek, daf, and riq. The three main strokes are a right-handed strike in the center of the drum, which produces a deep tone called dum; and a right- and left-handed strike at the edge of the drum, which produces a high tone called tek and ka respectively. On the daf and riq, the tek and ka strokes are played with the ring finger at the edge of the skin and the cupped hand in the middle of the head. The riq is also shaken to play the jingles.