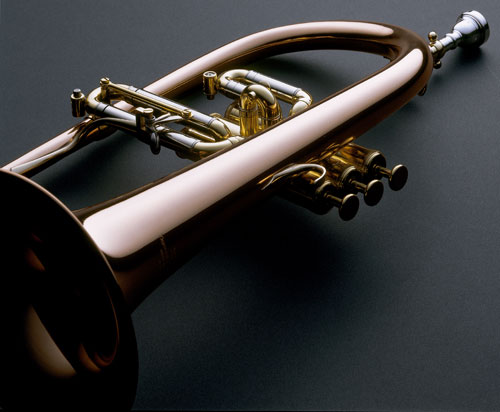 The flugelhorn developed from the bugle, a signaling horn used in the Middle Ages and made out of bull or ox horn. This developed into a large, semicircular hunting horn made of brass or silver that was used by military during the Seven Years' War (1756–63).

Wrapping the horn around itself once, so the bell pointed directly away from the player, enabled keys to be added, and the resulting instrument was known as the Klappenflugelhorn. In 1832, Michael Saurle, an instrument manufacturer working in Munich, swapped the keys for valves. The valved flugelhorn quickly gained popularity and was particularly influential on Adolphe Sax (1814–1894) in his development of saxhorns. It is considered by some to be a member of the saxhorn family.

The flugelhorn is conically bored and uses an extended mouthpiece as a tuning slide so as to not interrupt the bore. It opens out considerably into the bell, which gives it a mellow, smooth timbre, but also contributes to problems in intonation that can only be overcome by the player's skill. Its mouthpiece is cup-shaped but much deeper than that of the cornet or trumpet.


The flugelhorn in performance

The flugelhorn is not commonly used in the orchestral repertoire, but it has found a permanent place in the brass band, where it forms an integral part of the cornet section. It is in jazz that the flugelhorn is heard at its best. It was part of Woody Herman's band in the 1930's, as well as appearing in Duke Ellington's orchestra.

It was in the cool-jazz style epitomized by Miles Davis, however, that the flugelhorn found its natural home. Davis's introspective style, coupled with Gil Evans' colorful orchestrations, made the flugelhorn the perfect vehicle for projects such as Miles Ahead and Sketches of Spain. Since the 1970s, many players have doubled as both trumpets and flugel players. It has also been an important part of jazz orchestration, often being used in groups of three or four.