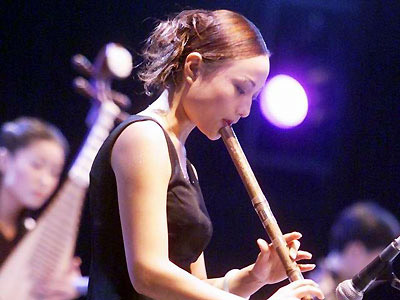 In East Asia and South America, some end-blown flutes have a feature that requires a different embouchure from ney and kavals. A 'U'-shaped notch is cut in the rim on the opposite side to the player. It is bevelled on the inside or the outside of the tube to make a thin edge at which the breath is directed. The rest of the tube's diameter is sealed by the outside of the player's lower lip. The flute is held vertically.

The best known of these notch flutes is the Japanese shakuhachi, an instrument of lumpy appearance but refined technique. The name derives from the Japanese for 'one foot eight (tenths)', the traditional length for the instrument – though many are longer. Made from the bamboo cut near the root where the nodes are close together, the flute is almost club-like, with the lower end extremely thick-walled, slimming towards the blowing end. The blowing edge (utaguchi) is often made more robust by an insert of hardwood, horn, acrylic, or other durable material. There are four finger holes on the front and one on the back.

The notch flute is said to have arrived in Japan, in antiquity, from China, via Korea, where a similar instrument is called a tanso. The Chinese notch flute is called a xiao or dongxiao and is somewhat different. It is a long, narrow bamboo tube, usually with five holes on the front and one on the back, which produce a diatonic scale. The notch is cut at a node, and most of the node septum is left intact, so it performs a similar role to the player's lower lip on a shakuhach (though players tend to cut away more of the septum to make a better embouchure). Its sound is quiet and reflective.