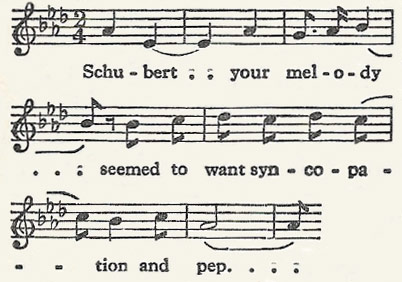 Improvement introduced into a theme from Schubert's 'Unfinished' Symphony. (The London Revue Joy Bells during the early 1920s.

Syncopation is an alteration of the expected rhythmic emphases. In other words, its a displacement of either the beat or the normal accent of a piece of music. It might involve accenting (see accent) a weak (instead of a strong) beat, or replacing strong beats with a rest (silence). For example, in classic ragtime tunes, the accents are not on one-two-three-four but on one-two-three-four. Syncopations disturb the regular, predictable pattern of strong and weak beats (as indicated by the time signature).

Among other musical genres in which syncopation is commonly used are jazz, funk, reggae, hip-hop, progressive rock, ska, dubstep, samba, and dance music. In the form of a backbeat, syncopation is found in almost all contemporary pop music.

All composers of all periods have used syncopation, and, being a very simple and natural device, it often occurs in the folk song music of certain races. The Scottish Snap is an instance of syncopation, though here the normal divisions of the beat, rather than those of the measure, are contradicted. (but this a little more than a matter of notation, for a beat is really a sub-measure.)

The prevalence of syncopation in African music, and hence in that of African-American music, is an important influence in the history of jazz and of twentieth-century popular music generally.