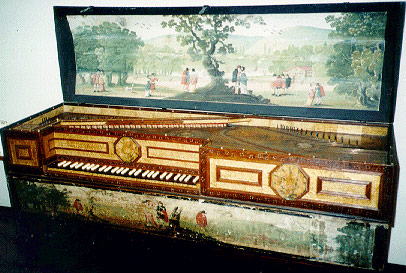 The virginal, or virginals (the singular or plural form are acceptable these days, although the plural was used in Tudor times) is a keyboard instrument of the harpsichord family. The origin of the name is obscure. What may well be the most famous title page in the history of music reads: 'Parthenia or The Maydenhead of the first Musicke that ever was printed for the Virginalls'. The date was 1613, and the collection, of works by Will aim Byrd (1543-1623), Orlando Gibbins (1583-1625) and John Bull (1562-1628), was probably the first music ever printed from engraved plates.

The virginal is really a small harpsichord, generally rectangular in shape, with the strings running parallel to the keyboard on the long side of the case. It has a single set of strings, normally with one string per key. The virginal lacks the coloristic variety of the harpsichord (though not necessarily its volume) but, as many paintings of the period show, it outshone the harpsichord as the most popular of all domestic keyboard instruments. Confusingly, though, the name 'virginals' was applied throughout the sixteenth and seventeenth centuries, particularly in England, as a generic term for any keyboard instrument in which the strings are plucked rather than struck.


Music for the virginal

Apart from its intrinsic value, the contents of Parthenia belong to that great body of music in which composers first wrote idiomatically for a keyboard instrument, clearly differentiating it in style from vocal or string chamber music (itself hardly distinguished at all from vocal music). It contains many passages, particularly very rapid ones, which could never be convincingly played – if played at all – on a non-keyboard instrument, with the exception of such other plucked instruments as the lute, cittarone, or guitar. However, little or no stylistic distinction was made by Renaissance composers between the virginals. the spinet, the clavichord, the fully fledged harpsichord and the organ. In addition to the composers mentioned above, important composers of the English virginals school were Peter Philips (1560-1628), Giles Farnaby (1563-1640), Martin Peerson (c. 1571-1651), Thomas Weelkes (1576-1623), Thomas Tomkins (1572-1656) and Benjamin Cosyn (c. 1570-1652).