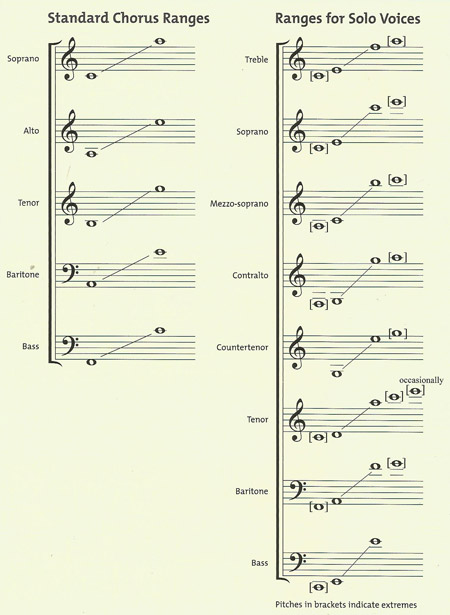 Male voice types fall into four main categories. From highest to lowest they are:


Additionally, there's a rare and unusual male voice type known as countertenor which is falsetto-dominated.

Female voice types fall into three main categories. From highest to lowest they are:

Essentially, all these voice types are differentiated on the basis of range. But even within a given voice type, male or female, there may great differences between the sound made by one singer and the next. The question is: what factors are responsible for the differences in pitch, timbre, and loudness of sounds that different singers produce?

The most obvious influence on pitch that comes to mind is the size of the sound-producing apparatus; we can observe from the instruments of the orchestra that smaller objects tend to make higher-pitched sounds, and larger ones produce lower-pitched sounds. So it's logical to assume that small people make high sounds, and large people make low sounds. And this assumption is borne out by the facts, at least to some extent. Baby cries have a fundamental frequency of around 500 Hz (roughly corresponding to the note B4). Child speech ranges from 250 to 400 Hz (notes B3 to G4), adult females tend to speak at around 200 Hz on average (about G3), and adult males around 125 Hz (or, B2).

So, it does seem to make sense to relate body size to fundamental frequency, at least at first. But if we think more about it, we know that big opera singers don't always make low sounds; there are very large sopranos, and some rather short, slender basses. So body weight and height can't be a sole determining factor.

Perhaps a measurement of something more relevant to the voice source itself, such as the size of the larynx, would be more helpful. Men, on average, have a larynx which is about 40% taller and longer (measured along the axis of the vocal folds) than women, as seen below. But this doesn't explain all of the difference between male and female fundamental frequency. But there is a size difference inside the larynx which does explain the full difference.

If we assume that the vocal folds are 'ideal strings' with uniform properties, their fundamental frequency is governed by this equation:

The key variable here is the length of the part of the vocal folds that is actually in vibration, a quantity known as the effective vocal fold length. If we examine this quantity for men and women, we find that men have a 60% longer effective fold length than women, on average, which fully accounts for the difference we see in fundamental frequency between the sexes.

Along with pitch, another variable used to classify voices is their quality, or timbre. Formant frequencies and timbre are related to the length of the vocal tract. Different vocalists have different vocal tract lengths, of course, and speakers and singers can control the tract length to a limited extent by raising or lowering the larynx. A longer tract results in a darker-sounding voice, while shorter tracts will make the voice sound brighter. One must also keep in mind, however, that the length of the vocal tract is largely determined by nature. Some of us are born with necks that are swan-like, while others are quite short.