BETWEEN FIRE AND ICE: The Science of Heat - 6. Rays of Warmth 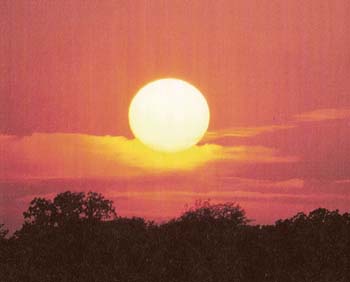 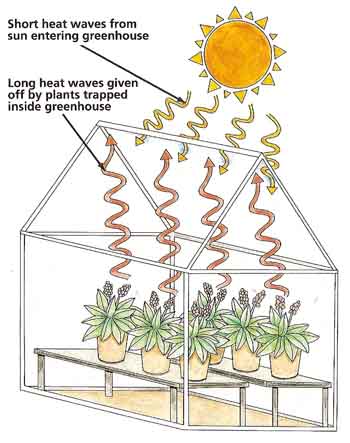 Figure 2. How a greenhouse works.

Stand outside on a warm summer day and you can feel the Sun's heat on your face. But how does it reach you? There is nothing but 93 million miles of empty space between the Sun and the Earth. Heat can only travel by conduction or convection where there is matter. To cross empty space, it must move by a different means. The third method by which heat moves is called RADIATION.

Heat radiation, like light, consists of waves. Hat waves are also known as INFRARED waves. The only difference between infrared and ordinary light is that the waves of infrared are father apart. Both infrared and light waves travel at about 186,000 miles per second in empty space. At this speed, they take just over 8 minutes to go from the Sun to the Earth.

The amount of heat radiation soaked up by a substance depends on what type of substance it is. Dark, rough materials are good absorbers of infrared. Light, smooth materials, however, bounce back, or reflect, most of the heat radiation that falls on them. For example, a dull, black surface will feel much hotter on a sunny day than a shiny, white surface.

A material that reflects light like a mirror, such as metal foil, will also reflect most of the heat waves that strike it. This explains why spacecraft, which must remain cool inside even in permanent sunlight, are often wrapped in shiny metal foil.


A Trap for Sunlight

Glass will let both light waves ad heat waves from the Sun pass easily through it. Any object that is under glass will absorb some of the Sun's heat. This object will then give off heat waves of its own. But the new heat waves will be farther apart than those that came directly from the Sun. These longer heat waves cannot pass through the glass, so they are trapped inside. As a result, the temperature of the air and objects under the glass rises (see Figure 2).

This is how a greenhouse works. It traps heat from the Sun and uses it to speed the growth of plants. You can make a miniature greenhouse simply by putting a jay over a patch of grass on a lawn. A few days later the grass under the jar will have grown taller than the surrounding grass, because it has been kept warmer.


The Earth: A Giant Greenhouse

Some gases work like the glass in a greenhouse. In other words, they let heat radiation from the Sun reach the Earth, but block the longer heat waves travelling back up from the land and sea. One of these greenhouse gases is carbon dioxide. This is a substance that we breathe out and that plants take in. Plants turn the carbon dioxide into oxygen, which we need in order to live.

One of the problems at present is that many human activities produce large amounts of carbon dioxide. These activities include burning gas in car engines and burning coal and oil in electricity-making power stations. At the same time, people are cutting down large areas of forest in places such as Brazil, so there are fewer plants to remove carbon dioxide from the atmosphere. The result is that the amount of carbon dioxide in the atmosphere is steadily going up. This is increasing the greenhouse effect and may soon cause average temperatures around the world to rise. Many scientists say that this is already happening and that we must tale immediate steps to cut the amount of carbon dioxide and other greenhouse gases going into the air.