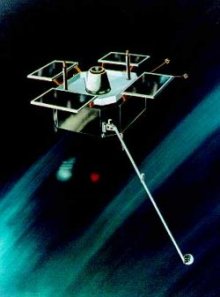 AMPTE (Active Magnetosphere Particle Tracer) was an international mission to create an artificial comet, in the form of a plasma cloud, and observe its interaction with the solar wind. It involved the simultaneous launch, on August 16, 1984, by a Delta 3925 rocket from Cape Canaveral, of three cooperating spacecraft into highly elliptical orbits.

The German component (IRM, or Ion Release Module) released a cloud of barium and lithium ions to produce the "comet", the American component (CCE, or Charge Composition Explorer) studied its resultant behavior, and the British component (UKS, or United Kingdom Satellite) measured the effects of the cloud on natural plasma in space.

This was first the time a plasma cloud was released by a spacecraft. In the future, it has been suggested, manned spacecraft might use contained plasma bubbles as a form of deflector shield.