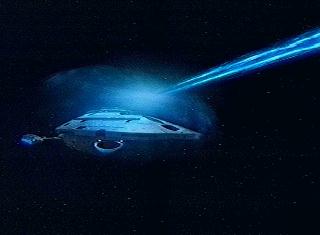 The starship Voyager uses its shields as protection against enemy fire. 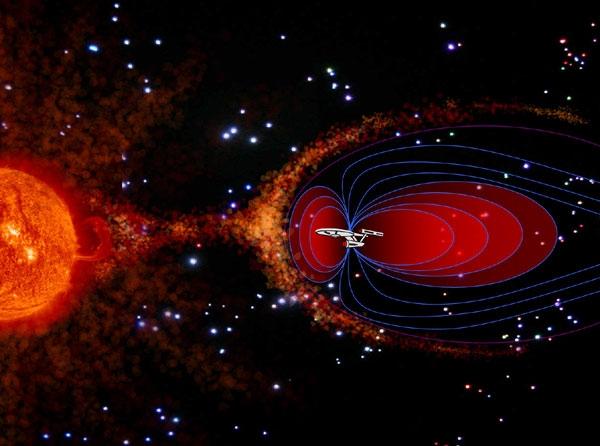 A hypothetical bubble of plasma used as a deflector. 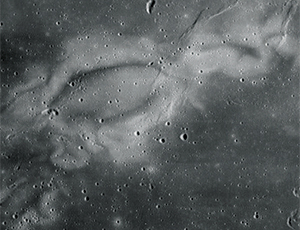 Light-colored patches on the Moon where a localized magnetic bubble shields the surface from bombardment by high-energy charged particles from the Sun.

In science fiction, a deflector shield is an energy field of some kind that serves to absorb, dissipate, or deflect inbound projectiles or beamed energy weapons. Deflector shields, often referred to simply as "shields" or "deflectors", figure prominently in the Star Trek universe. They have also been used in many other science fiction works, dating back to the 1920s.

Spacecraft such as Giotto and Stardust, designed to pass through the dusty tails of comets, are equipped with passive, material deflector shields called Whipple shields.

Another kind of deflector that uses a bubble of charged particles, or plasma, has been proposed for use of future manned spacecraft as a way of protecting the crew from exposure to high-energy solar radiation while en route to distant destinations such as Mars (see radiation protection in space).

The first spacecraft to deploy a plasma cloud was one of the satellites in a mission called AMPTE (Active Magnetospheric Particle Tracer Explorer), launched in 1984. A plasma cloud thousands of kilometers across was released in order to learn more about the interaction of solar wind particles with Earth's magnetosphere and to serve as an artificial comet. However, as the cloud wasn't contained it completely dispersed over time.

In 2006, researchers at the University of Washington, funded by NASA, examined the potential for a plasma cloud to serve as a spacecraft shield. The spacecraft would release hydrogen gas and ionize it with a high voltage device. The resulting protons and electrons would form a cloud and be prevented from dissipating by means of a charged wire mesh surrounding the spacecraft. The plasma's magnetic field would serve as a powerful deflector of charged particles in cosmic rays (from the Sun and elsewhere in space), equivalent to aluminum shielding several inches thick. The larger the cloud, the more effectively it would deflect cosmic rays. But a larger cloud would need a bigger cage to contain it, and would therefore increase the spacecraft's mass.

According to one estimate the optimum size of the plasma bubble might be about 100 meters across. At that size, the containing mesh would have to be stowed for launch and deployed once the craft was in space. The mesh would need to be made of superconducting material and be able to operate at relatively high temperatures, since it would be heated by sunlight. Future spacecraft might be powered by advanced engines that use plasma as a propellant. In that case, the discarded plasma could be recycled for use as a radiation shield, so that, effectively, the spacecraft would be protected by its own exhaust.


Clues from the Moon

In principle, a deflector to protect a spacecraft from high-energy protons and electrons could be made generating a magnetic field around the vessel. However, a problem with this is that it always seemed it would take a huge amount of energy to deflect protons, which are much more massive than electrons. But thanks to a phenomenon observed on the Moon it might be that a relatively low-energy magnetic field would work after all.

Light-colored blotches on the Moon had long puzzled theorists. Then, from observations made the Apollo missions, it became clear that these blotches were associated with local magnetic bubbles measuring a few hundred meters across. The puzzle remained, though, because the field strength was only strong enough to deflect electrons not protons, which should have punched straight through and darkened the soil as has happened elsewhere on the lunar surface.

An experiment carried out at the Rutherford Appleton Lab in the UK, the results of which were published in 2012, may have cleared up the mystery.[1] The researchers fired a beam of protons and electrons, representing the solar wind, at a simple magnet. The electrons were deflected around the magnet as expected. But the protons, too, were deflected, after starting to penetrate the field. As the electrons and protons moved apart, the separation of charge gave rise to an electric field – much more powerful than the magnetic one – strong enough to pull back the protons and force both types of particles to travel around the bubble set up around the magnet. The possibility then arises that a much weaker magnetic field than expected could serve to protect a spacecraft from solar storms and the like.

The Earth and other planets have natural deflector shields in the form of magnetospheres. Without its magnetosphere, the Earth would be subjected to intense bombardment by charged particles from the Sun during episodes of solar activity. The Solar System as a whole also has a magnetospheric deflector shield known as the heliosphere.