'A' series of German rockets 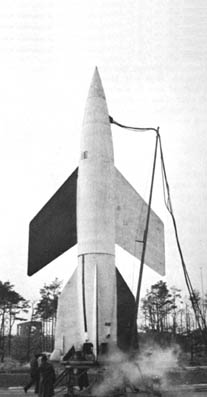 The 'A' series was a family of liquid-propellant rockets built in Germany immediately before and during World War II. With the 'A' (Aggregate) rockets came technology that could be used either as a destructive weapon or to begin the exploration of space. Key to this development was Wernher von Braun and his team of scientists and engineers.


Steps leading to the "A" rockets

After World War I, Robert Goddard in the States discussed in a paper (1920) the possibility of reaching the Moon by rocket. By 1935 he had constructed a liquid-fueled rocket, steered by a gyroscope which moved vanes against the jet, and rose to a height of 7,500 feet. Independently in 1923 the Rumanian mathematician Hermann Oberth published a book in Munich on the theory of space travel. He concluded that the construction of a machine to carry humans beyond the Earth was technically feasible, and would be accomplished within a few decades. He recommended liquid-fueled rocks, and made refined calculations of different kinds of rocket trajectories.

While these developments were occurring, the German General Staff was preoccupied with the problem of evading the restrictions on sizes of guns, imposed on the Germany Army by the Versailles Treaty. They turned their attention to rocket missiles, which were not covered by the Treaty. In 1929, they confidentially investigated the ideas and personalities of the space-travel and rocket enthusiast. They were most impressed by the young student of astronomy von Braun, and in 1932 engaged him to undertake the development of rockets. The General Staff secured Walter Riedel, a first-rate engineer, to help the space enthusiasts make their ideas practical.

Riedel had had much experience in the handling of liquid oxygen with the Heylandt liquid-oxygen company. With his assistance, the enthusiasts built a rocket motor to run on alcohol (as a fuel) and liquid oxygen (as an oxidizer), which developed a thrust of 650 lb. A rocket was designed to be driven by it and was given the code name A-1.

Before the A-1 was finished, an improved rocket engine developing a thrust of 2,200 lb was developed and it was also found that the A-1 was unstable. The A-1 engine was used as a static, test-bed engine. Located at Kummersdorf, it enabled various designs and components to be tried out.

The A-2 was essentially a flight-capable version of the A-1. In December 1934, two A-2s were launched from the North Sea island of Borkum and reached a height of about 2 km.

A more secluded development station was required. On the recommendation of von Braun, this was set up at Peenemünde on the Baltic coast. Missiles could be fired along the coast up to distances of 250 mi, and kept under continuous observation. The station was opened in 1936. The following year, the new A-3 rocket was launched. Measuring 7.6 m in length and weighing 748 kg, it was powered by an engine that produced 14,700 newtons (N) of thrust. Three flights were made, none completely successful because the A-3's gyroscopic control system was too weak to give adequate steering. Consequently, a new test rocket was developed with the designation A-5 – the name A-4 having been reserved for a future military rocket.

The A-5 was built with most of the components from the A-3 but with a larger diameter airframe, a tapered boat-tail, and a new steering control system that was incorporated into larger, redesigned fins. Measuring 7.6 m in length and 0.76 m in diameter, it used the same 14,700-N motor as the A-3 and was test-flown from the island of Greifswalder Oie on the Baltic coast. The first flights, conducted in 1938 without gyroscopic control, came close to the speed of sound and reached an altitude of around 8 km. The new guidance system was installed in 1939, enabling the A-5 to maneuver into a ballistic arc, and by the end of its testing the rocket had been launched 25 times, reaching altitudes of nearly 13.5 km. The stage was set for the arrival of the remarkable A-4 – better known as the V-2.