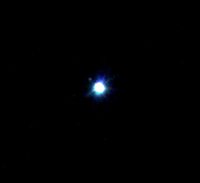 Adhara (Epsilon Canis Majoris) is the second brightest star in the constellation Canis Major. It lies below Sirius at the lower right of a triangle of bright stars known to the Arabs as "the Virgins," from which its name (alternatively spelled "Adara" or "Undara") derives.

Adhara is a binary star. The primary is one of the hottest of the bright stars: so luminous that if placed at the distance of Sirius (just over 8 light-years), it would shine 15 times brighter than Venus. Astronomers have used its spectrum extensively to study the nature of the local interstellar medium. The secondary, which has an apparent magnitude of +7.5 and an absolute magnitude of -5.0, lies 7.5" away with a position angle of 161° of the main star. Yet, despite this relatively large angular separation, the components can only be resolved in large telescopes, since the main star is some 250 times brighter than its companion.